← LEAVING PHOENIX
From Home to Day-Care →

The Angels of Resistance 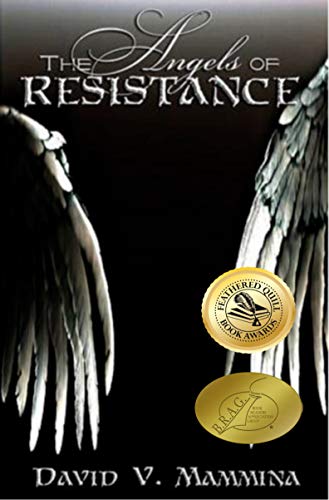 The Angels of Resistance, by David V. Mammina, is a dark fantasy novel that follows Michael Miuriell as he journeys to conquer the darkness. Miuriell learns he is evil reincarnate, the second coming of a demon lord called Abaddon, and seeks to destroy the demon plague without losing himself in the process.

Michael Miuriell is known as a peacemaker throughout the kingdoms and yields great power. He commands the Staff of Truth and uses his telekinetic powers for good. The story begins with Miuriell stranded at sea after his beloved home of Pommel is destroyed by a demon plague. Michael is taken aboard a ship, headed for Tinaria, and he must warn the King before their kingdom faces the same demonic evil. Throughout the novel, Miuriell bands together the finest warriors the kingdoms have ever known, as well as another sorcerer to defeat the demon plague. Miuriell, along with Princess Shina, have ties yet to be uncovered to the demons they wish to destroy. To defeat the darkness, they will have to overcome the evil within and embrace their inner selves.

Author David Mammina has a very descriptive writing style. Most of the novel gives great imagery and it feels as if you are experiencing each battle with the characters. The story is fast paced, and the plot unfolds steadily throughout. The book is an interesting blend of supernatural demons, medieval fantasy with and sword and sorcery.

While I enjoyed the story, I felt that there was a large amount of characters introduced. So many people spring up throughout the story that they are hard to keep track of. When reading I focused on a small group of characters as they had more development and were a major part of the storyline throughout.

The Angels of Resistance is a riveting dark fantasy adventure. Author David Mammina twists the stereotypical demonic storyline into a gripping fantasy. I would recommend this book to anyone who enjoys epic fantasy novels with compelling characters overcoming darkness.

← LEAVING PHOENIX
From Home to Day-Care →