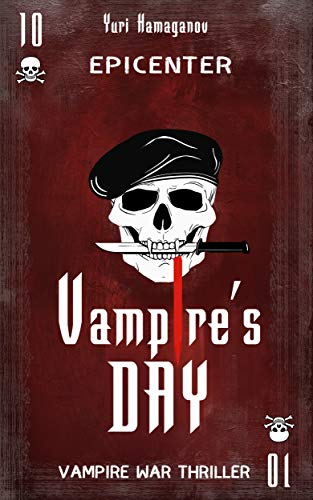 Book 1 of Yuri Hamaganov’s Vampire’s Day series is a tumultuous and chaotic exploration of a mass vampire attack on both the government and the military, but mostly on the city of Los Angeles. It is a violent, no-holds-barred thrill ride into all the different nuances of the attack, from all possible sides involved. The story begins on an otherwise typical morning in Los Angeles, where at the LAX airport Flight 263 lands, bringing with it violence, shootings, and what most believe to be an organized terrorist attack. The true horror that this attack unveils over the course of the narrative involves no terrorists, and instead the reader learns that this attack has been methodically planned for years as a way for the vampires to assert absolute control over the city.

The reader gets thrown into the action in this faced paced vampire thriller making this an intense read from start to finish. The reader gets to see  different perspectives of the characters in the story making them more relatable. At times I wasn’t sure what new perspective I was reading from because there are a lot of characters in the story but this didn’t take away from my overall enjoyment of the story. In a post apocalyptic world fighting for survival you don’t have time to take a deep dive into someone’s life, but maybe book 2 will have more character development.

Hamaganov’s world building and descriptions are deep and detailed and serve to create an immersive atmosphere. The reader is able to clearly visualize what the character’s are doing and what their surroundings look like. I found the gun and armor talk to be interesting as I know nothing about weapons and Hamaganov’s extensive knowledge is impressive—at times it was almost as if I was reading a military artillery manual.

Vampire’s Day is a suspenseful horror with blood and action galore. Fans of fast paced and hard hitting action will have plenty to devour in this sensational apocalyptic adventure.