People Want to Destroy It

The Bystander finds mankind trapped in time, never aging, which brings out the best and worst in mankind. What was the inspiration for the setup to your story?

My inspiration was a scientific theory that i read about. Please, don’t ask me, it’s a major spoiler for the story! And once i read it, the main story created in my mind.

The characters in your story were intriguing and well developed. What were some driving ideals behind your character’s development?

The first thing i did was think about what characters i want to tell my story. Then, i made a storyboard which showed what journey would make every character from beginning to end. Τhis technique helped me develop my characters as best I could.

I wanted to explore three themes that intrigue me. The first was the hunger for power. The second one was how easy you can believe everything because you have the need to feel that you belond to somewhere. And my last and favourite theme was whatever political system you apply (good or bad), if some group of people want to destroy it, then they will find the way and they will do it.

For my next book, i want to play with the theme of stereotypes. In another words, i want to break them. Αnd I know you will be immensely sorry for what I say, but I am at a very early stage. 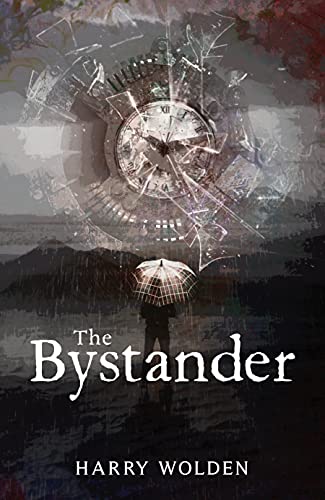 What would happen if time just…stopped? If people stopped aging, and the sun never again moved from its current spot? The people on Earth had the opportunity to find out, and the answer turned out to be chaos and war. For the groups of survivors who remain after many moments, no one could say exactly how long, each day is a struggle. Those that are just trying to make it have to contend with time cults and cannibals, as well as other survivors who may or may not be benign. Is there any chance of the world returning to normal? There are clues that point to an unlikely place for salvation.

The Bystander by Harry Wolden is an epic tale of a dystopian future that is stuck firmly in the present. Wolden weaves the story through a variety of voices and points of view, a device that isn’t always easy, but he does it extremely well. The beginning of all the trouble is laid out calmly enough, with an introduction to a few of the main characters, before everything gets wild and the story takes on a palpable sense of chaos and uncertainty. By the time the action really gets going, the impression is that an incredibly long amount of time has passed since time stopped, but it is never made explicit as there is no way for the characters to know, and truly it doesn’t matter. Each new group adds another layer to an already exciting story until an eventual showdown between those who want a return to normal life, and those who have created a religion around making it happen.

The Bystander touches on many themes over the course of its pages, some of them wholesome like family, hope, and resilience. It also doesn’t shy away from the ideas of arrogance, greed, and power and even the best of us harbor to a small extent. The book is multi-layered and complex without ever feeling too heavy or difficult to understand. Wolden does an excellent job of balancing all the pieces and building a complete environment for us to witness, for better or worse.

The Bystander was easily one of the best sci-fi novels I’ve read this year, and was engaging from the very start. Wolden crafted a plethora of characters that weren’t always likeable, but were nonetheless always interesting and he created an epic story from a unique idea. Highly recommended!