Her Eyes Underwater follows a university student who starts a relationship with a stranger with a dark and dangerous secret. What was the inspiration for the setup to this thrilling story?

The inspiration for this story came from true-crime murder stories, especially those featuring serial killers like Ted Bundy. I wanted to write a fictionalized version of a big, scandalous serial killer case with different perspectives of the events included. I also wanted to start the story off in an unexpected place, so I chose Julia’s infatuation with a mysterious man as this gateway to a larger, fictionalized crime universe.

Julia is an intriguing and well-developed character. What were some driving ideals behind her character development?

She was designed to be someone who is realistically frustrating. She does some unadvisable things in the novel, but some people do act pretty strangely when they’re infatuated with another person. This is especially true for people that are used to getting what they want. She was also designed to work in perfection disharmony with Alex if that makes any sense. All of the refusals and mysteries he uses to keep her away only spur her on.

Alex and Julia have a provocative and enthralling relationship. Was their relationship planned or did it develop organically as you wrote?

Both. I had a basic idea in my head, but as I started making myself put the words on a page, it was an organic progression.

This is book one in your Bowman Case Files series. What can readers expect in book two?

In book two, the scope of the events will be expanded. As I mentioned above, Julia’s infatuation with Alex was a gateway (or one perspective) to the larger story revolving around Alex’s deeds. I don’t want to give too much away, but let’s just say Alex’s lifestyle has its drawbacks and he will start encountering some difficulties. While there will still be a focus on the intense relationship between Julia and Alex, the crime fiction aspect of the books will start to come out as new characters are introduced. 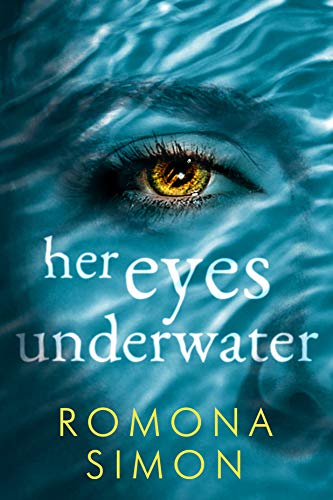 Her Eyes Underwater by Romona Simon is suspenseful true crime inspired novel that begins when Julia goes to a coffee house to indulge in her hobby, men. It isn’t long before she finds an attractive one. Soon we are questioning her wisdom in getting into his truck and letting him drive her out into the woods on a dark and  lonely road. We are then transported to a funeral with a dysfunctional family who doesn’t seem too broken up over the death. Then we meet a class of law students who seem to spend more time skiing, playing racquetball, and fighting over mates than studying law. And women keep dying bloody deaths. What is happening? And why does this gorgeous guy act so peculiar?

Her Eyes Underwater has a unique ability to pull you into the story with the simplest details and a patchwork of enigmas that slowly come together to create a chilling mystery. While the slow build up was something that took some getting used it, when I was in the midst of the story I was enthralled and couldn’t put the book down. Julia is an engaging character, although sometimes frustratingly naive, her character adds a sense of the unknown. Couple that with Alex, who takes the cliche of the ‘dark mysterious stranger’ to a whole new level. Julia and Alex’s relationship, for me, felt balanced on a knife’s edge; anything could happen at any moment.

Although I enjoyed the characters I felt that the descriptions of the actions and people were a bit cumbersome in places, along with the use of some odd adjectives that made me stop and pick up a dictionary. But if you’re not afraid of new words and are ready to dive into a fully realized world that is thoroughly described then you will find plenty to enjoy in Romona Simon’s electrifying romance novel.

The scenes between Alex and Julia are steamy without being vulgar. This is definitely for mature audiences to enjoy. Her Eyes Underwater has an ending that was surprising and left me begging for more. This is a gripping start to what promises to be a riveting crime series.