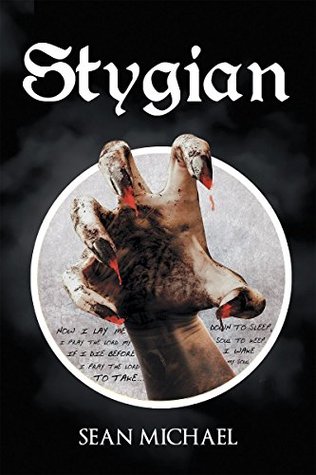 Stygian, by Sean Michael, is a thematic arrangement of 52 poems based on the author’s life, interspersed with occasional quotes. The anthology is completed by an additional three poems in memory of three late friends. Stygian is organised in chronological order, from the author’s tragic childhood to the events that likely contributed to his incarceration, as mentioned in the author’s biography; in this way, the collection presents itself as a poetic autobiography. It’s a frank and dark work, which doesn’t hold back from the usage of swear words or in the stark descriptions of abuse, neglect and self-harm, so readers should use their discretion.

There’s a lot that could be said about this author, but after a read through, what stood out the most was the wide variety of poetic styles he used. The contents range from poems that read almost like a rap, written with short staccato lines and a regular rhyme scheme, to others that feel classical, with long and flowing verses. Partly, this seems to be a stylistic choice, and a clever one, too. Poems from his youth embody the language of a child, such as the word “doggie”, while the adult mind raids the full English lexicon to produce descriptions containing such gems as “empyrean” and “tenebrous”. It’ll give your linguistic knowledge a workout, that’s for sure. Other poems have a more contemporary feel; one appears to be a piece of prose, while The Monster is written entirely in capital letters.

However, there is much to recommend; poems like Sleeping with my Shoes On, which throws away a rhyme scheme to convey a sense of childish excitement, at odds with the glimpses of a deprived childhood. My personal favourites are The Man in the Box and the subsequent Endless Tunnels of Darkness which are beautifully descriptive and flowing summaries of the author’s life (and therefore Stygian) and his emotions about his current situation.

The order of other poems feels like an emotional jump as a reader, yet this is easily explained by the author’s unsettled life – art reflecting life in every way. It is uncomfortable to read the memories described in Away From the Disarray or Something to Cry About, but this is beside the point, which is to honestly portray everything the author has been through.

With this in mind, it can only be said that this is an effective piece of work. Just as no human can be fully understood by another. The content cannot be dismissed, because it is true, although it could be argued that it was still a little raw in places – like the emotions it conveys. The author does show great competency with a range of styles, though, and I would personally love to read more from him on other topics after he has developed some of his ideas further.