Looking For An Escape

Vale Born follows a young woman who discovers she’s half Fae as she sets out to find her missing friend and gets caught in the middle of a war. What was the inspiration for the setup to your story?

I wanted to write a great fantasy adventure with epic world building and thrilling situations. I knew basically what I wanted to write, but I wasn’t sure where I wanted to start. I was visiting my family ranch in San Diego when inspiration struck. In the hills far off to the east there is a grouping of cliff rocks that I grew up looking at, they always felt off-limits and forbidden. That was the start of it all, the question of what if I had always been drawn to that area for a reason? The idea that the rocks were alluring because there was a tear in the Vale germinated–a passage to another world, and only someone who was born near the Vale could pass through it. The whole story evolved from that point.

Lily is an intriguing and well developed character. What were some driving ideals behind her character’s development?

It was important to me that Lily is a proactive protagonist, though she is displaced in a mystical world and seemingly stuck there, I wanted her to have agency. It was also important to me that she not be perfect, and on top of that she is dealing with her own issues of anxiety and PTSD. She gradually starts to face those issues rather than avoid them. As we join her on her adventure, we get to be there for her journey of healing and self-discovery as well.

I wanted there to be diverse magical creatures and for the story to feel very lush and vivid, but I still wanted it to be relatable to the human experience. There were several themes I wanted to include, while this book deals with loss and recovery from that, I wanted to explore what happens to a young person when they don’t take the path that they had always expected they would take, such as a specific career or college. She had always intended to become a horse veterinarian, yet when it came time to actually pursue that goal, she turned away from it, and didn’t move forward. I really wanted to dive into what Lily would be feeling at this point, as she is now twenty-one. Lily’s anxiety and PTSD stem from an event that changed the course of her life. She’s looking for an escape, which is another way for her to avoid moving forward. Instead of an escape, she finds her decisions are far more critical and involve more than just her as she’s confronted with life-and-death situations.

I just finished the first draft for the third book in the Vale Born series. I like to give a little breathing room after finishing a draft before editing begins, so while that simmers I’ll be working on a fantasy Christmas novella set with fellow author Laura L. Hohman. I’m looking forward to writing something different! We expect those to be released around Thanksgiving this year. 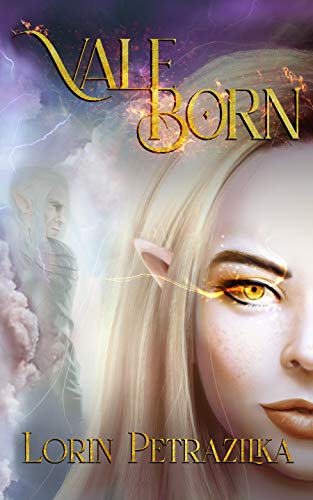 Vale Born is a thrilling YA fantasy book by Lorin Petrazilka. It follows the life of Lily, a young woman who discovers she is half-Fae after she passes through a portal to another realm. While her journey begins as a search for her recently missing friend Josie, it develops into much more than she had anticipated.

She meets different kinds of Fae, makes friends, falls in love, and even experiences shocking betrayals. At some point, she is even caught in a love triangle. But while living in this new realm is far from boring, it comes with dangers at every corner. Ultimately, Lily has to figure out who she really is and decide what home means to her.

If there is one thing that this book has going for it, it is its suspense factor. The author manages to keep us at the edge of our seats throughout the narrative. We are constantly wondering who means well and who doesn’t. Additionally, since the book is written in the first person from Lily’s perspective, we discover new information and revelations all through her perspective. This makes the narrative feel more like real life and also creates a sense of camaraderie between Lily and the reader. You can’t help but root for her and feel her loss more deeply. This is further intensified by the fact that Lily’s character is very well developed. You not only get a sense of her physical features but also of her personality and beliefs. It is the little idiosyncrasies that the author includes that make this character believable and relatable.

By the end of the book, you can clearly see the major themes that the author was trying to discuss in this narrative – love, family, belonging, and the importance of tenacity. The author also does a good job of tying the behaviors of the characters to their intentions in very realistic ways.

Moreover, her writing style is light yet informative – she tells you the most with as few words as possible. As such, there aren’t any long-winded paragraphs and the dialogue is clear and precise, making the book easy to read. Also, the author is great at infusing humor and quirkiness in the story, particularly through Lily’s personality.

Vale Born is a suspenseful new adult story that creatively combines romance with epic fantasy in a compelling way that makes this novel relentlessly entertaining.