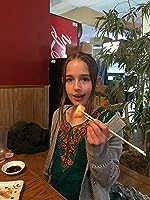 Children of the Elements follows four children as they discover magical abilities only revealed when they come together. What was the inspiration behind the idea for this novel?

I really don’t know where the idea came from. I was super into Harry Potter, and I was seriously just laying on the floor one day and thought of it. When I finally started writing, I had been thinking about it for like two years and slowly building up a story line.

I felt that the characters were well developed and changed with the story. What were some driving ideals behind their characters?

Well, Brenna was the most like me, so she was easy. Dimitri was a lot like my “best friend” at the time. Adara is sort of the person I think I am growing into (my mom totally says so!), and Wyndham is kinda me when I am around new people!

What has been a motivating factor for you to become a young writer and how has your family supported you?

My mom published books that were doing really well, and I was like, “I wanna do that!” Then my mom gave me a copy of her friend’s daughter’s book (The Fairies of Waterfall Island by Emma Sumner who was only eight at the time), and I knew I could do it too!

But my mom kept on me because I get distracted easily. She’s a book editor and owns an editing company, so she helped me plot out the milestones and character arches and helped a LOT with vocabulary and avoiding repetition–like everything ending with “said.” Cuz I do that a lot…

This is book one in a series. Where will book two take readers and when will it be available?

Well, it’s gonna show us life in the Realm of the Gods and why it’s WAY more boring when everything is perfect! Dimitri is the main character in Book Two instead of Brenna. There will also be four new elemental characters (hint: rhymes with schragons!). And there will actually be four books total. With each Devins kid as the protagonist. I finished the rough draft already, but now it’s going through my mom before it goes through the rest of her editing team. Editing Book One took almost six months, so I guess I will be lucky to get it out by the end of this summer (2019), but that’s the goal. I hope to have Books Three and Four done by the end of 2019 too. 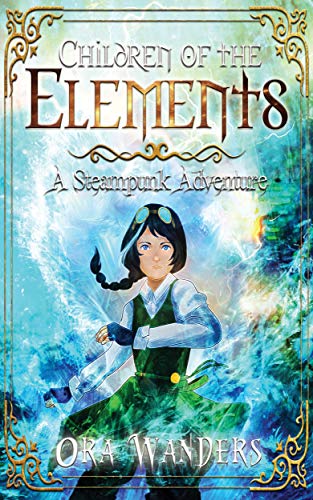 When twin girls, Brenna and Adara, move from posh Victorian England to a humble farmhouse in America, they quickly notice that all is no longer as it seems…

While Brenna has always had an affinity for water and Adara has always loved fire, the girls now discover they have some sort of CONTROL over these elements as well!

They learn how true this is when they meet another set of twins—boys named Dimitri and Wyndham who also live in their new town.

When the four children get together magical things start to happen!

Something sinister has been lurking in the town waiting for the moment the four children finally activate their newfound abilities.

You’ll love this magical steampunk fantasy by a child-author because of the lovable characters and non-stop action!

Children of the Elements

Brenna and Adara are twins living in England that spend their days with tutors and fancy automated machines. When not working on their schooling they’re reading from the Grimoire. From the Grimoire they learn of the Elemental Gods and pretend they were them. It wasn’t until they moved to Massachusetts that they began to realize they were different. On their first day of school they meet twin boys, Dimitri and Wyndham that share their same last name, Devins, as well as strange white streaks of hair. From there they realize they all have over-sized pets, a toad, lizard, owl and rat that just found the children and attached themselves to them. Slowly as they get to know each other they develop strange powers, telepathy, the ability to control elements, and the mysterious Grimoire that each has a part of starts morphing before their eyes. What does it all mean? How are they connected? Why are strange things happening to them? What happens when the stories they read as children suddenly start coming to life?

Children of the Elements by Ora Wanders, is set in a steampunk reality of the semi modern world. There are parts that remind me of early frontier times, the one room school house, the simple country life, but then she adds in the steampunk elements of automated machinery and clothing choices. It is a mix of modern and old and blends together in a fascinating way that makes sense to the story line. Each set of twins have similar backgrounds, only one parent, both moving from homes with lots of machinery to a simpler life and only bringing a few things with them, the Grimoire that seems incomplete to each set. When they meet, it is literally like puzzle pieces fitting together. The story is exceptionally well written and everything flows naturally and story elements occur organically. I could picture the characters clearly, the bickering and playing around that you expect from young adults comes out. I found it all relatable, even in the magical setting.

This was a book that I didn’t want to put down. The plot moves quickly, the character development is integrated with the plot, so you’re not weighed down with back stories and character development early on. All that information comes out as you meet the characters and see them interacting with their pets, teacher, and each other. They are typical teenagers with attitudes and short tempers, but you see them grow from the early pages to the end. Without giving away key elements, I can say that all four children are able to grow and see their potential while still retaining a child like wonder of the world. It has all the elements a reader of fantasy could want; magic, conflict, family drama, growth, and an open ending to continue the saga.

One of the most amazing things about this novel is the author. Ora Wanders is only ten years old! I could not believe this when I finished the novel and wanted to learn more about the author because I loved the book that much. I am looking forward to the second book in the series and much more from this amazing young lady.