This is where fact and fiction blur

The Souls of Witches follows a demon with a dark past and a witch that must challenge her assumption of soul mates after one passionate night. What were some sources that informed this novels development?

I’m not sure what you mean by sources. The characters always come to me fully formed in my mind so beyond knowing what their strengths and limitations are, I just set the stage and let the book play out. But as I was working on Souls of Witches, I did realize I had inadvertently echoed a previous book of mine, Surrendered Darkly. In that book there is the question of if you can fall in love with someone from your past after they’ve broke your heart. I say The Souls of Witches is an echo of that previous book because Rowan and Lars have sex in the beginning of the book, go their separate ways, and then find themselves thrown back together by circumstances or fate. So how do you now create a relationship from what was the definition of a one-night stand with a virtual stranger? Each book puts the cart before the horse and deals with the question of “now what” and “can this really work”.

As to sources, many years ago I went to a witches ball in Atlanta, Georgia. Much of what I put in those chapters occurred on that night. But not all. This is where fact and fiction blur. I also have personal knowledge of witchcraft, the holidays that are celebrated, and an intimate knowledge of kitchen witchery, hedge witchery, and what it’s like to work in a café. Concerning Lars, I had already laid out in book 3, The Dreams of Demons, what the limitations and demands a demon character would possess. Strict adherence to those world-building rules played a large part in the direction this love story took.

I thought my biggest challenge was going to be creating a solid relationship between two characters that didn’t hinge strictly on their sexual chemistry, but it turned out that it was far more difficult to accurately portray Rowan’s magick and power as a witch, specifically a kitchen witch. You see, all of the supernatural characters that are represented in the fictional Pale are, of course, products of my imagination. The gods, demigods, werewolves, demons, shifters, and fae are based on myths. But witches actually do exist in our modern-day world. I’m one of them and have been for the past 30 years. I’ve also known other witches, all of whom get a little tired of the way witches as a group are portrayed in books and Hollywood. So when I decided to create this series, I was determined to represent witches in a realistic way even though this is fiction and all the other supernatural characters would likely dominate the series. Witches are human. They love nature. They have varying gifts and talents. Some are odd. Some are mean. And, the way each witch expresses magick in the world is different. With Rowan, I wanted to inform the reader as to how a kitchen witch experiences magick along with creating a cool love story. Describing energy, the taste and feel of it on the tongue and skin, turned out to be a difficult dilemma for me. I think after many attempts and edits, I came reasonably close.

I enjoyed Lars and Rowan’s relationship. What were some ideas you wanted to explore with their relationship?

This book’s plot, more than any other in the Legends of the Pale Series, was driven by the two main characters. Each of their arcs is a little different, Lars’s journey of self-awareness being the greater, but both Rowan and Lars had to overcome internal struggles and definitions of who they thought they were in order to gain a happy ending for the reader. Lars had to confront his past, learn who his mother really was, and in doing so accept that his father wasn’t the monster he’d always believed him to be. Rowan had to reexamine her life choices, learn to lower her protective walls, and accept that though she is a mere kitchen witch that she’s also powerful. Powerful enough to control Lars, a being who undisputedly sits at the top levels of the Pale’s supernatural hierarchy. And without giving away how she does it, Rowan also had to be the one to rescue Lars and their future together.

So the shorter answer to the above question is that in order to find true happiness and acceptance with someone else, we have to examine our own baggage.

This is the fourth book in the Legends of the Pale series. Will you continue the series, or are will you be focusing on different stories?

Yes, I love this series and have several more book ideas in the works. Because each is a stand-alone novel, I’m not tied to following just a few characters. Instead I have the entire universe of the Pale in which to play. I’m currently working on The Tears of Dragons and The Heart of Monsters. I hope to release one of them by the end of this year.

The Souls of Witches 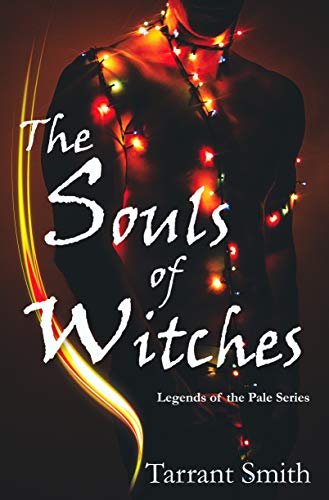 The Souls of Witches, by Tarrant Smith, is an alluring tale set in a fantasy world full of witches, demigods, shape shifters and other supernatural beings. The story starts with a party orchestrated for love and romance between Rowan and Lars. The author creates an enchanting world, Mills and Boons style, that provides a creative escapist fantasy. Lars is a charming and impulsive hybrid of demon and demigod, a child born as an experiment by his grandmother Morrison, who forced a demon to have sex with his demigod mother. Rowan, who enjoys her solitude is fiercely independent, doesn’t want any companion, but the intensity of desire for Lars swamps her. The two are drawn towards each other from the first encounter and enthralled with each other. Due to Lars’ dark history and his evil, destructive grandmother, the union can be catastrophic. Will they be able to reunite or have to live a life pining for each other forever?

Author Tarrant Smith has created a captivating mystical haven called the Pale. The place is full of mysterious characters fighting for love, struggling with hate, assault, cruelties, and a blooming romance between Lars and Rowan. The use of imagery was fascinating; I could visualize the beauty and scenes like a dream. The protagonist is quite likeable and well presented. She’s bold and strong-willed and admirable. I thought she’d be some regular fiery heroine and some average dark lord, but they have definite character arcs. Both as individuals and as a couple!

The setup to the story felt familiar, but I’m so glad that I continued reading because the story does evolve into something uniquely imaginative. Even if demonic, the characters are relatable, their feelings and emotions are genuine, and conflicts are incredibly human.

The book follows the footsteps of traditional young adult fantasies, with lots of action and an easy to follow plot that was entertaining, I kept waiting for a twist I didn’t see coming. This is a novel that is propelled forward by the two main characters that are deeply developed, but I wanted to see that same level of development in the interesting side characters that come up throughout the story.

The Souls of Witches is an enjoyable story of a magical world full of supernatural characters. I genuinely liked this book because of its simplicity and passionate love story. It’s just pure enjoyment, which is honestly great in this time of uncertainty. I would recommend this book to adult fantasy book lovers. I think these people will be able to enjoy reading this lite paranormal romance.