A knight and something else…

The Strangest Woman follows a woman who struggles to keep her secrets hidden when confronted with new emotional connections. What was the inspiration for the setup to this riveting story?

The inspiration for Kyana’s character, from which the rest of the story flowed, was a daydream I often had as a child. Kids daydream about being princesses in flowing ball gowns, mermaids able to breath under water, queens with power and influence, etc.

Me? Of course, I fantasized about being all those things. But I also dreamed of being a knight. A knight with shining armor, the right hand to a great leader, the epitome of courage and loyalty. A knight and something else… but that would be a spoiler. So, people will just have to read and see if they can guess what else I daydreamed.

Kyana is an intriguing and well developed character. What were some driving ideas behind her character development?

The driving force behind Kyana’s character comes from her battered soul. And anger. Lots of anger.

She has been through so much and has had so much ripped from her hands and heart. She started erecting walls around herself, creating space between her and everything and everyone, to defend herself or others… well, I’ll leave that for you to decide.

I enjoyed the depth of the world you’ve created. What were some sources that informed your world’s creation?

Well, a great deal of the world developed around the concept I had for Kyana, and the way that magic works in my universe. I wanted magic, but not abundant magic for everyone’s availability. Certain sections of my world do not allow the “practice” so I needed to limit the source (or else it would be essentially impossible to implement laws against its use – or at least impossible to enforce such laws). So, I decided that it could only be found in dragons. Then I had to limit that source further for the sake of where I wanted to take the story and Kyana’s character. So, I had them all killed, three hundred years before our story starts. But I still needed there to be a reason for such laws to be in place. So, the magic still resides in dragon bones that still exist in the world but are generally under the lock and key of the kingdoms… but not all of course. No, that would be too easy. The rest of the world either developed to explain the reasons for that concept, flowed from that concept, or randomly fell into my mind while daydreaming.

I am working on two books at the moment. The first is a paranormal novel which I am currently seeing if anyone would like to publish, and I am also working on the second book in the Past and Passed By series. Not quite sure when either of them will be available. 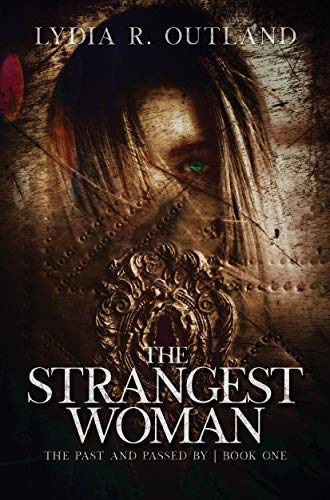 The Strangest Woman is a story that gets more compelling the deeper you go. The author slowly reveals details of the main story which always keeps the suspense high. The plot of the novel, while  unique, was built up in a creative way. Lydia R. Outland’s words are easy to understand, with simple language that encourages even non-readers to plow through this engaging book.

In The strangest Woman we follow Kyana Castway, an enigmatic woman with a remarkable past. Kyana, and the secrets she keeps was something that kept pulling me back to this book. There is a constant air of inscrutable intrigue about her and the story. I liked this character because of how expressive she was. One could read her face just by the authors excellent descriptions of her, even though I felt that there were some details that were repeated, possibly for a better understanding for the reader. Kyana Castway is an extraordinary woman, given the things she went through in the past and how she deals with things that affect her current status and future.

Imagine living in a seemingly bloodthirsty world where everyone seems vile, violence gets to be part of your life and the people you thought you could rely on get to be strangers. In this book, the reader gets to live through various lives that may get one emotional, sad, or angry. I appreciate how Lydia Outland portrayed Kyana Castway. Despite the obstacles and strange encounters, I got to love this character because I could see both her strong and weak sides. Lydia Outland is so good with words that one not only gets to read her characters’ personalities but also gets to understand their roles.

You know a book is an exciting read when you get to understand, if not relate to, the major characters. The plot twists, action, and mystery surrounding characters will keep you engaged through the sometimes lengthy pieces of exposition. The Strangest Woman presents a great adventure story for avid fans of epic fantasy and a great start to what is sure to be a spellbinding series.