← A Monster of My Own
Views from the Asylum → 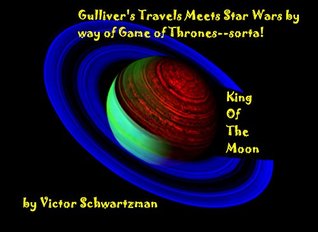 King of the Moon is a story is about the strange, entertaining, and hilarious life of the king. What was your inspiration for the wild journey you take readers on in only this one week of the kings life?

I have written all my life, and as an adult generally had projects. King of the Moon was the latest—it was time, again, to write I novel. I’ve tried previously but was never happy with the results. For a while an idea had been in the back of my head about someone dying and waking up on another planet as its King. I decided to give the idea a try. The first chapter worked out pretty good, and then the second, and then, with rewrites, it was a year later. Why the subject matter? Our current world demands satire! I look at everything from the current Presidential election campaign to environmental issues to personal politics.

I found this novel to be a cutting piece of satire. What is one thing that you hope readers take away from your novel?

That they enjoyed it and want to read it again.

Most of the book takes place in the kings head, his thoughts and ruminations. What was your writing process to ensure you captured the essence of this character?

Well, each chapter had to satirize something. Sometimes low fruit, sometimes stuff high on the tree. Each chapter had to advance the plot. It also had to advance the main character. For example, it was after the first four chapters that I stopped and figured out what the rest of the novel would very roughly be. Short chapters. For satire, I started with the urge to have Kings and Queens instead of a democracy. Fox News and its impact on media played an important role. People fighting each other rather than a common enemy. Trading jobs for environmental pollution. Our world has plenty to satirize. Also, I played with Game of Thrones and Star Wars, two favorites.

The next book? The first seven or so chapters, unedited, are on http://www.redfez.net, along with a bit of my poetry and short fables. I started this graphic novel (is there another name for what I’m doing?) in 1994. There are 26 completed chapters. Currently I am going back and editing the chapters. As the original desktop publishing software no longer functions with modern Windows, I can only edit the PDFs, but that will do. It is fine tuning. The graphic novel? It is the story of a failed social services manager who wins the lottery. He uses the money to start a community newspaper. To prove he is a good manager, he only hires people who had been fired. He also deliberately creates problems.  Each chapter of the novel is one issue of the newspaper. This originated over 20 years ago, when there were community newspapers. Each issue is complete, with news articles, movie reviews, a comic strip and, on the end page, a puzzle.  You find out what is happening through those, along with the classified ads. It is reading fiction obliquely. It is reading fiction as if the novel was a newspaper and you could flip from article to article, choosing what you read.  The plot for each of the six characters progresses clearly, at least to me. Why have I spent so long working on this? I started almost as soon as I had my first computer. There is something about the concept. I love the format, which allows me to work in jokes and sarcasm.

A satirical novel where Gulliver’s Travels meets Star Wars via Game of Thrones. Look into a dimension where everyone grows up believing Fox News! Plenty of jokes and cheap shots! A look at one week in the life of a new King who does not want to be King!

← A Monster of My Own
Views from the Asylum →