← The Escape Is A World Changing Event
Not Just Transgender → 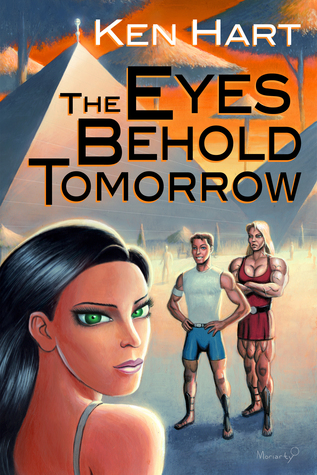 The Eyes Behold Tomorrow by Ken Hart is fast moving action filled fantasy novel. Ken Hart describes his writing perfectly, “believable, without incredibly ridiculous situations that suddenly appear to solve all the character’s problems” (Hart p166). This novel merges human and a race called the Feletian into an intertwined future encompassing alliances and some galactic waring with other races. Feletian is a matriarchal society where the men are claimed into what are called stables. Women rule and men are expected to defer to them in almost every situation. They are also known for their peace keeping ways. They are non-violent and only use force when absolutely necessary. The two main characters are Robert Teach, a millionaire playboy from Earth, and Kamini a Feletian recruiter and Princess from Feletia. The two of them end up having a volatile relationship with good and bad moments, but always working together for what is in the best interest of Feletia, even if their views and tactics don’t always agree. Robert is a hot shot that likes to shoot first and ask questions later, Kamini prefers a more peaceful approach and always looks to see the good in others.

The story starts out with the recruiting of men from Earth. Typically, the Feletian’s were looking at the best military men Earth had to offer when Kamini approached Robert and asked him to join up. Having nothing better to do with his life at that point he agreed. The character of Robert is your typical arrogant playboy that thinks he knows it all and doesn’t take orders well. He makes an enemy in the first few days with another recruit, Desaris. Robert and Deasaris’s relationship is almost as interesting as Robert and Kamini. They might not like each other but will have to work together to save the Feletian’s and ultimately Earth from the alien races known as the Lyonians and eventually the Grrulagan.

Queen Aphelia is the peace keeper; she takes great interest in Robert from the start. In reference to the title, The Eyes Behold Tomorrow, some of the women of Feletia have what they call the gift. This is an ability to see into the future. She sees Robert’s future and his importance to her world. Because of this, she puts up with a lot from him, his lack of conforming to protocol, and his unorthodox, by their standards, tactics in just about every area of this life. He is a great commander and becomes the captain of their new prototype space craft. His role as captain makes things challenging as his relationship with Kamini and her family grows. Robert develops a strong attachment to Kamini’s little sister Princess Selena. This attachment starts showing Robert there is more to the world than himself and what he wants to do, he starts thinking critically and growing. The transformation in Robert is dramatic by the end, but not so much he loses his charm. Kamini proves to be a strong leader and capable of enduring the worst the world throws at her. Together they set out to create peace in the galaxy they reside in.

Overall the world that Hart has created is original and captivating. The strong female roles show how women can be strong and nurturing and still rule without faltering. I think this book would appeal to a wide variety of readers, science fiction lovers, people looking for strong independent women fiction, and anyone that just want a little less outlandish science fiction. The book does not have happy resolutions, there is no perfect bow to wrap up the story line. The book is open ended enough to leave room for sequels but even if Hart does not continue this story line, there is a satisfying ending. It does end on a happy note for those that want a book that can stand on its own.

← The Escape Is A World Changing Event
Not Just Transgender →