The Escape Is A World Changing Event

The stories were written individually. Many of them were written many years ago as a way of answering questions. I needed to know things about my world, like how it was created, and where certain things came from. Every world has a creation myth. I needed one of those. I wanted dragons, and I needed to know where they came from. Some stories in here helped me deal with my own demons and come to terms with my past. Some of the stories bind together books I would later write. Others were just dream stories. For instance, I always dreamt of knowing how Clark and Ferallorn met. To Love A Beast came from this desire. The plan was never to publish this book. It shouldered its way in when I realized I wanted to give prospective readers a look at the world to help them decide if they wanted to commit to reading one of my novels.

What is your favorite story from the collection and why?

I have two. The Apprentice’s War showcases a wizard named Saykobar. It is exciting to see his introduction to the world. It gave me a thrill to write the first words of his story because Saykobar goes on to do many great and terrible things. He shapes the course of the world. It was fun to watch him shrug up from the ground like the bud of a poison flower.

Then there’s The Stalwart. This was the first short story I wrote about Perilisc. I wrote it in 2005, sent it out to magazines for publishing, and received a handwritten rejection letter. I was told the story had promise, but there were major things wrong with it, major things wrong with the world it was in. No one source has had a greater impact on the creation of this world than that one letter. It focused me, helped me realize what I was doing. It’s my favorite of my many rejection letters, and I’m lucky to have gotten it.

Simon the Bard seems to be the only consistent character through the different stories. He travels the world claiming to be a simple story teller, but seems to be much more. What were your ideas when creating this character and did he turn out as planned?

In my family, there were fantastic storytellers. I wasn’t concerned with playing with my siblings and my cousins. I wanted to be standing by the poker table in the haze of smoke, listening to the adults tell wildly inappropriate stories. I always wanted to tell those kind of stories, always wanted to tell a story well. So I apprenticed under the great storytellers of my family, learning everything I could about how to craft a description and how to nail a climax. Simon is a result of that training. Stories are important. It’s how we understand who we are and the world around us. Stories give us power, the power of knowledge and the power of understanding. That was the concept behind Simon Bard. He’s a wandering storyteller. But he only goes to the people who need to hear the story. He goes to the heroes that need light cast upon the world around them in order to commit acts of bravery and startling deeds of wonder. Simon has shaped the world. He helped craft it and he loves it. He is trying to provide guidance. He is exactly how I planned him to be, and I’m very proud of him.

Will readers ever get to find out what “The Escape” is?

Yes, The Escape is so important. It is the defining moment of my world. It provides the B.C. / A.D. point for my history. The Escape is a world-changing event. It brings about much hope and much despair. I can’t tell these stories without it. It will be revealed in books to come, and its effect will forever change the face of my world.

Will there be another book that tells more stories of the land of Perilisc?

Oh, man. Is this ever a firm and resounding yes! Perilisc is the platform for 26 books. I have 21 of them written, and today I started the 22nd. In rough draft form, I have written 10,600 pages of Perilisc story. I have five more novels to write before I set Perilisc down for a moment and concentrate on other places. Perilisc is the name of a continent, not a world. These novels tell the story of that continent. But after these books have been written, I cast light on other corners of the world. I have conceived three acts to my career, and after these 26 Perilisc novels, I will have finished Act I. There is more Perilisc coming. I have decided to publish a book every six months for the next 32 years. 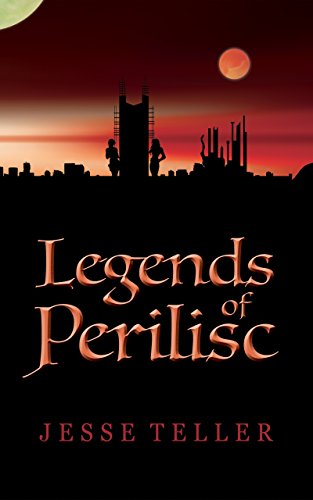 This collection of short stories features myths and lore from Perilisc, a unique fantasy setting. Journey deeper into its history. Struggles of royalty, immortal love, unruly wizards, lost heroes, blistering vendettas and more, provide gripping insight into the scope of this realm.