← More of a Mystery
Creatures Venturing From Another Dimension → 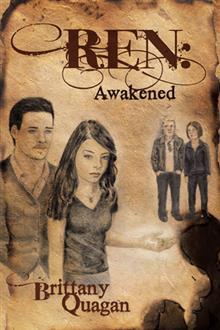 Brittany Quagan’s book REN: Awakened is a great introduction into the world she has created. The novel starts out with a paranoid teen from the foster care system. It seems like Ren has nothing going for her in life and you start to feel a little sorry for her. Ren ends up in a psychiatric ward where she meets Kiki. Kiki helps her escape and they meet up with Gage. Ren is also reintroduced to what she thought was her imaginary friend Al, but Al is really a lot more than just a childhood dream. Together they will work towards completing their mission of saving Earth, and the world called Eight that they are all originally from.

Once Ren has escaped the psychiatric ward she starts to learn more about who she is, and what is happening to her. Ren is what is called and Implement. Implement’s are beings from a different plane of existence that has ties to Earth’s time line. Each implement that travels to earth has a different ability. Ren discovers quickly she has the ability to heal, both physically and emotionally. She absorbs energy from the world around her and she now has to learn how to control this energy and her abilities. Her companions, Gage and Kiki have different abilities, Gage controls elements like fire and weather, where Kiki is like a living computer absorbing and processing information at speeds that are unreal. Kiki also has a quark that she loves eating tin foil and raw meat. Al is different from Kiki and Gage, he is an Orum, a protector. Al’s job on this mission is to protect Ren at all costs. As the story reveals itself you learn Al was once more than a spirt protector for Ren and their history goes back many generations. One of the first memories of Ren’s past life we see through her flashbacks is back to the days of the witch trials where Al and Gage were both with her. All of their destiny’s, and souls, are tied to what they keep calling the Tapestry. This Tapestry will determine the fate of Earth and planet eight.

While the novel takes place in modern times here on Earth it gives flashbacks to early colonial history as well. All the story lines and flashbacks are on Earth, we only get a glimpse of their home planet when Kiki talks about Karma and the Weavers. The glimpse we do get is a good lead into what the rest of this series can bring. The bad guys in the novel are Perils and their creator and leader Erebus. These Perils feed off all the negative energy that Earth puts out. Ren has been charged with restoring the balance of the world and bringing back the light.

Overall REN: Awakened is an engaging and exciting book. It has lots of twists and back stories that are brought in and out. This book can stand on it’s own as it completes one small part of the story line, but is still leaves enough for readers to want to pick up the next book in the series when it’s out. I look forward to reading the rest of Ren, Gage and Al’s story. Also, who wouldn’t want to know how Karma actually makes things happen?

← More of a Mystery
Creatures Venturing From Another Dimension →

Leave a Reply to By Hook Or By Book ~ Book Reviews, News, & Other Stuff Cancel reply