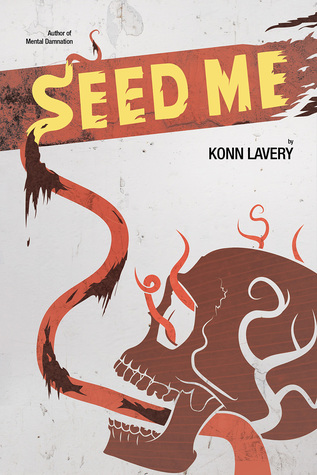 Would you like to try the 13 seed Remedy? It dates back generations and hails from Scotland. These seeds are the greatest of all Superfoods! If I were you I would steer far far away from those seeds. Like the olden days of the bible, beware the peddler selling snake oil, if it sounds too good to be true, it is, and will just land you in trouble. This is what happens in Seed Me by Konn Lavery. Unfortunately, for Logan and Janet the warning came too late and they ate the mysterious black and red seeds. This brings the unlikely pair closer than they ever intended to be, and into a world of magic, mystery and murder.

The story takes places in Alberta Canada, in the town of Edmonton. Edmonton is a tiny town where nothing exciting ever happens. The story is told from the perspective of Logan who is a recovering drug addict that plays in a band with his best friend Skip. Logan has a lot of emotional baggage from his drug addiction days, mostly the loss of his longtime girlfriend Emily that became one of the victims of the legendary 4-20 killings. These killings were thought to be done by a serial killer that is called the drainer because all the blood is drained from the victims. They are either covered in puncture wounds or partially ripped apart and still drained of all blood. The story line really takes off after Logan and Skip are out at a bar. While they are outside smoking and police chase ends across the street. When the police stop the truck a headless body is found in the back. Later behind the bar Logan starts kissing a girl who he later discovers looks exactly like the dead girl in the truck. This leads to Logan wondering if he is crazy, done too many drugs, or if he is really involved in some crazy plot.

Logan’s partner in all this is Janet, the hippy college girl that turns out to be a lot smarter than anyone anticipated. Character development on both Logan and Janet is slow going and your over halfway through the novel before you get a real idea of who Janet is and not the ‘dumb blond groupie’ she is portrayed at the start. Konn does a great job introducing the reader to the background and really gives a feel for the small town world. His attention to detail on developing the character of Logan and Janet and even Skip to a point, is meticulous. It does take a while to get the full picture but that’s because so many little details are filled in and really give the characters a full spectrum of characterization so that you can relate to them.

Janet and Logan start investigating the strange seeds and the murdered girl, revealed as a local named Vicky, and decide to talk to the truck driver. From the driver they learn about the strange group of people called harvesters. They ware long black trench coats, and have a tattoo and scarification of plants on them. They refuse to talk about these things and are very mysterious. Yet they keep showing up where Logan is.

Who are the harvesters, what is going on with the strange seeds, and why is Logan hearing voices? What is going on in him, and who is doing the draining on the bodies that keep showing up around town? Konn answers these questions and leaves the readers looking for more answers by the end. While the theme has a lot of Pagan and Vampirism traits, this is a unique twist and its own direction. An engaging read that will draw you in and connect you to the characters.