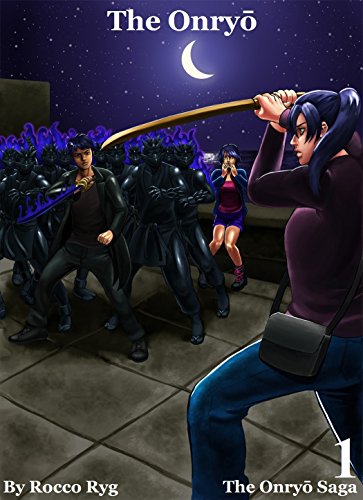 “Japanese teenager Chikara Kaminari, while heartbroken by the death of her mother, inherits a strange black ring. Her mother’s will tells her to share it with her best friend, Renka, and a socialist student named Gen, so that they can save the world from political fanatics. Guided only by cryptic clues yet honor bound to obey her mother, Chikara does as she’s told. As the three develop extraordinary abilities, including emotional manipulation and control over darkness, they set out to uncover the origin of the ring and its connection to their mind-controlling school bully, Michiko.

Their destiny becomes clearer as Michiko’s power grows beyond her control, setting a classmate on a murderous rampage. As predicted, dangerous extremists appear, seeking to use the ring’s power to force their political views onto all of humanity. Chikara and her friends must put aside their partisanship and become the heroes they were destined to be.”

The Onryō by Rocco Ryg is a science fiction fantasy set in Japan. It is reminiscent of a traditional manga where teenagers are the main characters and take on heroic roles with outlandish situations. Some of the outlandish situations include the supernatural elements that writers often feature in Japanese manga and their other works. The book follows the main character, Chikara, through mostly a third person point of view. You get to see the thoughts of Chikara along with other people who she comes in contact, which is vital. Additionally, the main character makes exponential growth from beginning to end.

The first line of the book immediately draws you in. The writing of the book comes off as a very well done first draft that could use a bit of reviewing. Some of the emotions are not explored much, there were minimal grammatical mistakes, and there was one instance in which what was explained did not match what was said beforehand. The writing style increasingly gets better as you continue reading it. As such, it could have done with a bit more reviewing before publishing, but it does not keep one from enjoying the book.

You can tell from reading it that the person is a fan of Japanese cultures, as it reads like someone who knows about the culture and admires it rather than from an individual who was born in Japan. But again, it does not keep you from enjoying the book. The author was clearly influenced by their love of manga, as it was mentioned throughout. Additionally, there were many manga elements within the book, such as focusing on teenage girls, supernatural powers, and teenage romance

The plot of the book was interesting, but a little slow moving. However, it picked back up toward the end. The written action parts are genuinely some of my favorite scenes of the book. The supernatural elements are fascinating and the way it was incorporated not only made sense, but it is an exciting read. Although, the book did have stereotypical women in some places, it still led to some intriguing plot developments and character clashes.

I would recommend this book to anyone who enjoys manga, Japanese culture, and action. It contains much fast-paced action, which is exciting. I can only expect the sequel to be better than the first as the writing and character development of the story improves as it goes on, making any future works by the author promising. The ending of the book, while slow to build, was fantastic. I loved the ending and the change in the main character. It made me want to read the sequel.