← Goo of the Gods
The Beautiful Struggle →

Seb and his brother spend the summer in Spain with their grandfather who pulls them along on a journey to discover that the town is filled with dwarves of alien origin. What was the inspiration behind this fascinating idea?

The inspiration for this idea is that fact that my hometown in Spain contains a high number of perfectly proportioned very short people. I’m surrounded by ‘em!

I felt that the story was adventurous but also humorous. Did you have fun writing this novel?

Yes, especially as there is a deserted brickworks near where I live, which is much like I describe it – above ground! The research into UFOs and how they may be powered took longer; I was curious about them, having seen a few, usually in groups, as I grew up.

It didn’t change much, if at all. The characters are nearly always based on real people, including my own family. We all circle each other warily.

Seb Cage Begins His Adventures is book one in the Dreadnought Collective. In what direction does book 2 take the story?

Book 2 is The Inlooker, which is pivotal to the expanding series and you have already reviewed that. It takes us into the near future, where Seb Cage is going to occupy a planet where the population is going to be drastically reduced by gentle means. The types of transport are also undergoing fundamental change, as are the methods by which we are ruled. This is where I need a lot of support from readers, since I am prophesying a future that can become reality, if we realise that it is achievable. My fear is that our senses are being dulled deliberately and we have to snap out of it.

Seb Cage joins the action in the third book in the series, The Time Slipsters. If the first book becomes a success and I live long enough with my marbles intact, the series will become volumes, and his continuing adventures will be related in Volume 1, Book 2. 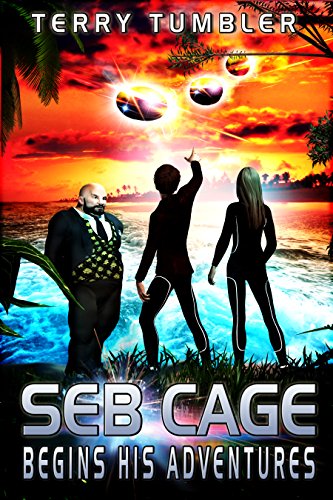 Seb and his younger brother Bart customarily spend all of their long summer holiday in Spain, with their grandparents. Gradually, as they all become older, relationships are strained, as the old folk try to find things to keep the boys amused.

It is not long before the grandfather, Tumbler, who is a retired detective, is using Seb as a trainee investigator to keep tabs on the movements of a sector of the local town who he thinks ‘don’t fit it in’ – they are in fact dwarves of alien origin.

Soon, Tumbler and his apprentice are rumbled, and Seb is invited to join a summer campus. Coincidentally, this is run by the dwarves and has only recently been set up, virtually on the Tumbler’s doorstep!

At the campus, it gradually becomes apparent that Seb and his classmates have been chosen beforehand, by genetic engineering. They find that they possess special abilities, which have been implanted in them at an early age, and realise that these are now being developed in a matter of weeks.

Whatever plans they may have had for the future, their chosen destiny now awaits them.

← Goo of the Gods
The Beautiful Struggle →