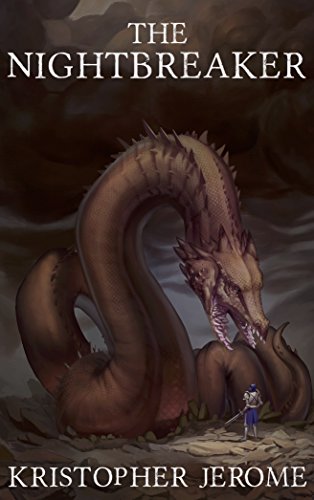 The Nightbreaker is a short but welcome sojourn into the world of the Gods and Men Cycle series by Kristopher Jerome. Following a paladin by the name of Daniel, we first are introduced into the conflict between the gods of darkness and gods of light and the conflict that is played out on the Mortal plane. Daniel is part of a mission that goes awry, but learns of a terrible new champion of darkness, Rexin the Blasted. As the story unfolds, Daniel bands together with other brave souls who seek out and stop this terrible menace, otherwise the mortal plane will be swallowed by darkness.

The pacing of Jerome’s novella is spot on, although sword & sorcery novels are often quicker paced. The first battle of the story takes place only a few pages in and I was immediately taken in by the action and everything that Daniel saw as he fought bravely through the demons. The setting is not overly elaborate, especially with the clashing of light and dark. The simplicity of the premise will leave fans of stories like Game of Thrones and others wanting more. But in it’s brevity lie its virtues, The Nightbreaker is a great read for an afternoon of leisure.

The descriptions that Jerome uses is rich and quite cinematic and I enjoyed the writing the most when details were delved into. The main character of Daniel is fun to read about, but begs to be developed further with some character-defining internal dialogue. The narrative is much more “show” rather than “tell” which I happen to enjoy. The story is often punctuated with a bit of action, which saves the stories pace and kept my interest.

With all of this considered, The Nightbreaker is a great introduction to the world of mortals and Gods that Jerome has created. The struggle between paladins, demons, and seraphs is a supernatural backdrop to classic fantasy tropes. This novella will please any reader of classic fantasy or the supernatural, who also enjoys action, redemption, and the struggle between good and evil. At 78 pages, it’s well worth your time.