← The Forsaken Book Trailer
The Butcher’s Daughter: A Memoir →

Book of Matthew: House of Whispers 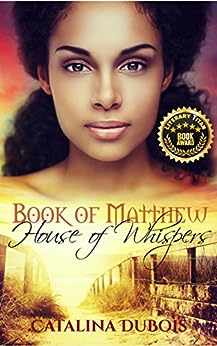 Catalina DuBois’s Book of Matthew: Part I. House of Whispers is a tale of forbidden love that, at times, seems Shakespearian in its delivery. The story begins in rural Missouri in 1850, a tumultuous time in the United States. Slavery was still very much in practice at southern plantations. Along with the master/slave dynamic came secret, taboo romances between captive slaves and free, white plantation owners and their family members. Matthew, the plantation owner’s son and heir, and Sarah, a slave owned by Matthew’s father, are two star crossed lovers trying desperately to navigate through social stigma, away from the plantation-dominated south, and toward freedom.

Barely a few pages into the first chapter, Matthew’s lust for the slave girl, Sarah, is evident. This is shown through a very sexually explicit scene that turns out to be a dream. There are a few of those scenes like this scattered throughout the book. Over all, I didn’t feel they detracted from the book, but might be a little too graphic for some readers.

The book seems accurate in its depiction of slavery. Slaves are subjected to unwanted sexual advances, beatings, whippings, and, in some cases, death. Families are ripped apart. Mixed race children are born in slave quarters. Secrecy is rampant. Slaves aren’t legally recognized as people. They are merely property. They are bought and sold as simply stock on store shelves. They are forced into unwanted marriages. They are denied a proper education, and are often punished if they find a way to become literate. They have no rights. They have no choices. This is a grave, but important reminder of America’s past.

Thank goodness for the few characters besides Matthew and Sarah who seem to have some common sense about them. A handful of characters, even during that timeframe, believed in equality. They are reminded at a point that race didn’t matter at all in God’s eyes, even if men’s eyes had such skewed filters. They find help from some unlikely sources as they try to outrun those who would rather see them dead than together.

The book keeps interest piqued through all the obstacles that Matthew and Sarah overcome to try to be together. There are similar story lines that play along parallel to theirs. Other pairs of seemingly mismatched lovers run and hide and jump through hoops to be together as well. This story based on love is not without its hindrances. Villains walk amongst them in their treks toward love. Menacing characters sabotage, violate, abuse, and even murder their victims throughout the story. They still don’t give up on each other. Even in such dire circumstances, love finds a way to unite. Ultimately, love conquers all.

DuBois’s story reads easily and quickly. I didn’t want to put it down. I found myself cheering for the more righteous characters, and hating the more deviant of them. The plot flows nicely, and loose ends are tied up neatly by the end. I’d love to read a Part II and see where DuBois takes Matthew and Sarah’s journey.

← The Forsaken Book Trailer
The Butcher’s Daughter: A Memoir →