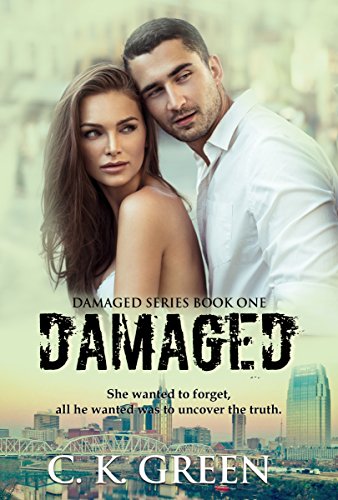 Kiera Blake is a girl running from her painful past in Damaged by C.K. Green. It has been eight years since she suffered an attack that left her paralyzed with fear and afraid to actually live her life. She survives by controlling her environment and not allowing many people to get too close. She basically has her job and one real friend, Anna. Her anxiety and panic attacks keep her from truly connecting with anyone though. Then, along comes Ethan Parker, someone she knows from the past. This unexpected turn of events sends Kiera spiraling out of control and frantically trying to suppress her feelings about the past.

At the begging of the story Kiera seems a bit shallow. She struggles with the trauma from her past but she is still focused on her looks, clothing and makeup. She was a character I couldn’t relate to, but I could empathize with. The writing at the beginning of the book seemed a bit forced and awkward. I noticed several places where it seemed like the the wording was changed but the superfluous words remained. But as the story progressed the writing became much more relaxed which helped it flow better. The last half of the book was a much more fluid and enjoyable read.

Ethan Parker’s character was more relatable to me. He was the police officer who found Kiera after her attack and is still haunted by it. I felt like the connection these two had because of it was haunting but deep. He went to high school with her so they have history together, with each secretly having a crush on the other. He started his own security business and relocates to Nashville because of the music scene and the need for personal security there.

Kiera and Ethan reconnect while out dancing and their chemistry is natural and explosive. From there, a deep love story develops. Some of the wording seemed a little cliché to me. There was a lot of “staring deeply into souls.” Despite that, as the story develops, I started to root for them, empathize with them, and (here’s a twist) I was able to relate to Kiera. It is clear they fit together in a natural and easy way. It’s one of the stories that makes you want to shout at them, “But you belong together!”, before you realize you’re shouting at a book.

Considering that this is Green’s first book, I think the few grammatical issues are minor and could be fixed in subsequent books. Also, Kiera’s personality grew on me as the book progressed. Despite not liking her at first, I found myself looking forward to seeing what happens to her in the second book. Plus, the last half of the book really did have me flipping pages quickly to see what was going to happen. This book takes a few chapters to grow on you, but when it does it’s impossible to tear yourself away.