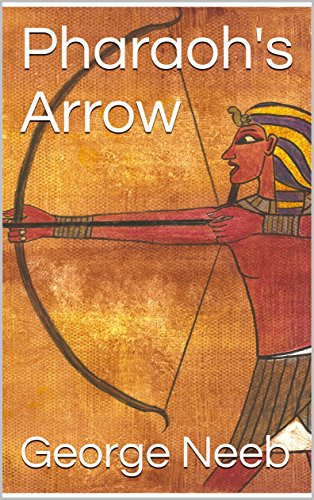 If you’re shopping for a picture book, George Neeb’s Pharaoh’s Arrow should be high on your list of choices. This unique book is an experience like you haven’t seen before – a whole book written and illustrated in the style of ancient Egypt! Neeb took the time to paint all the pages by hand and tell us a story of revenge set in the times of a bygone era. He studied Egyptian art and it shows on every page.. Every page is an individual work of art, bringing the artistic style of the Land of the pyramids into the modern format.

While set in ancient times of the pharaohs, Neeb came up with the story himself. As he explained, he tried to get the facts correct. The style of clothing and the makeup match the era the story is set in and he spent a considerable amount of time giving his book the feel of an old papayri. He didn’t just stop at the characters, whom he painted in the drawing style of the ancient Egypt, but went as far to match the authentic hieroglyphics that appear throughout the story with the text!

Pharaoh’s Arrow excels in the themes it takes us through. While picture books usually don’t trouble themselves with big moral questions, George Neeb had other ideas for his characters. What starts like a story of revenge ends up differently than you would expect. Without giving the details, you will be surprised with the decision the main character decided to go with. And while odd, the decision is very practical. Considering the times the story is happening the decision is quite fitting. I felt that Neeb’s poetry was not his strong suit and were not lyrically challenging, but he is still able to tell an interesting story.

Many odds and ends of the life of ancient Egypt show throughout the book. The story starts in quite an unusual way – the mother of Akia, our heroine, is killed by a crocodile which makes her father decide to live in the desert. Crocodiles where a predator on the Nile back in the day and the situation gives us a glimpse of life thousands of years ago. Burial rites of the ancient Egypt are also referenced and Neeb also talks about the spirituality that the people of those times were observing. His reference of “ba”, roughly translated as the modern concept of the soul, is something you will not find in many books that deal with this long gone civilization!

The illustrations are unique and make it an unforgettable work of art. At the end of the book Neeb even explains how to accomplish the style yourself, making the Pharaoh’s Arrow a perfect choice for anyone interested in painting and history.