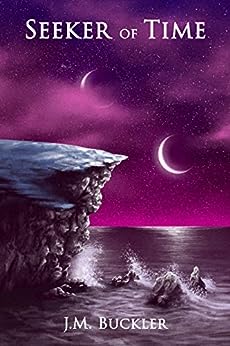 Seeker of Time by J. M. Buckler is an enthralling and fascinating story of science fiction, relationships, and action. Seeker of Time follows the paths of Elara, a young and relatable protagonist whose struggles with navigating the social scene in high school. This should be painfully familiar to any reader who has attended high school in the United States. Cyrus is the handsome and athletic high school star and newfound friend to Elara, and Jax is a mysterious and enticing visitor in their lives. The novel merits a solid four-star rating (I’m tempted to say four and a half!), lacking only in that it cuts the action at the end too short, though admittedly Buckler does lay the scene for a perfect sequel.

As Buckler weaves readers through the intricate details of their lives, readers will almost forget that the novel is a work of fiction as Buckler is so skilled at crafting realistic yet mesmerizing story lines and characters, leading me to feel as if I really knew Elara, Cyrus, and Jax. The character development is where Buckler truly shines. Though the protagonists are young adults, ranging between eighteen and early-twenties, Seeker of Time does not feel like a novel just for other young adults. Reading about the struggles of high school from the perspective of two high school students is a refreshing breath of fresh air, and I experienced genuine amusement and terror as I watched some of the high school scenes unfold, feeling lucky that I am now beyond the terrors of angry and vindictive foreign language teachers. The main character, Elara, is superbly developed, and watching her character mature throughout the novel is engrossing, as readers watch her progress from shy and reserved into a strong protagonist they will cheer for her. Cyrus and Jax are also well-developed, multi-dimensional characters, ones that readers will surely want to learn more about in the sequel to Seeker of Time.

The mélange of the world as we know it and the supernatural that Buckler has invented tie together seamlessly. Buckler does an excellent job of quickly but not hurriedly explaining the otherworldly aspects of the novel, which allows her to progress the novel’s pace without leaving readers confused. The worlds that Buckler has created felt entirely unique to me, like nothing I have ever read before, which made the novel truly delightful to read, and I found myself rapidly flipping through the pages to find out what would happen.

Seeker of Time is action-packed and quick paced, yet I found the finale to be somewhat disappointing. Buckler introduces what readers will understand to be the main goal of the story approximately halfway through, so I was disappointed to reach the end of the novel and find that the action I anticipated would have to wait for another installment in the Elara, Cyrus, and Jax series. Though perhaps that is not a true flaw, as I was simply too excited about what was going to happen. Regardless, in Seeker of Time J. M. Buckler has created characters and worlds that will draw in any fan of fiction and leave them satisfied, intrigued, and perhaps even questioning their own worlds.