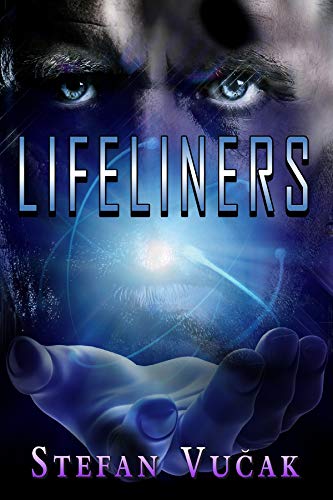 Wow, the details in this book are simply superb! Literally from page one of the story you are drawn in by the excellent attention to detail.

The main character, Nash Bannon, is hopelessly interesting and charming from the very first chapter. We learn so much about his past, his family life, siblings, and upbringing that by chapter two you are utterly fascinated and rooting for him no matter what. His love interest, Cariana Foster, is equally enchanting and the dialogue between these characters is so raw that you can’t help but fall in love with them. There is a huge elephant in the room regarding their relationship, but I don’t want to give away any big spoilers so let’s just say that it keeps you on the edge of your seat.

The idea of the Lifeliners; human beings that have evolved into some other state of existence not yet fully understood, is absolutely engaging. The way the author writes about the political atmosphere of the world surrounding these super-humans is realistic and you can feel the pain of their humanity (or non-humanity?) and the fear elicited from them by the rest of society.

The politics in this book is one of my favorite aspects. Because of how realistically the author conveys these ideas you feel like you’ve been transported into Nash’s world. Even though the idea of co-existing with humans who have super-natural abilities is un-realistic and physically unrelatable, the dialogue and world view portrayed in the book is so natural and believable that you feel like you are really dealing with the emotions of the characters on every page. The relationship between Nash and the homeless child Aleya (a lifeliner) is touching and tragic at the same time. To think of a world that can cast aside children like garbage just because they have different abilities is really upsetting to think about.

I also enjoyed the scientific aspects of the story. Literally no detail is left out when it comes to the genetic anomalies of the Lifeliners and Cariana’s work as a geneticist is fascinating. While liberties were obviously taken (as this is a fictional story), this aspect of the book is also frighteningly realistic. I felt as if this evolution within the human species could actually happen and that these types of moral dilemmas might really someday face the human race.

Overall, I would recommend this book, it was a page turner from start to finish. There aren’t many books that I can see myself reading multiple times, but Lifeliners is definitely one of them.