← Sacrifice and Know-How
The Journey Down South →

The Tribulations of August Barton follows college freshman Augie as he navigates many precarious situations with the help of his grandmother. What was the inspiration for the setup to this entertaining novel?

I remembered how truly alone I felt when I turned eighteen and first left home. How hard it was to realize that the world was so vast and full of uncertainty, that if I let it, it could just swallow me whole. Augie is essentially a figment of the inner me and a reflection of how I felt at that time in my life. Doing things on your own without anyone’s help or guidance for the first time is scary.

The funny thing is, Augie wasn’t the first character to pop into my head for this story. It was his grandma Gertie. I was surfing on the web for writing prompts one day and came across some comical ones like, the pizza guy, a hug that goes too far, and something unexpected under the bed, or something to that effect. At some point looking through them all Gertie popped into my head. She wasn’t a character I really had to come up with, she was just already there in my head. Gertie is a combination of different people all in one person. I used to work with an older waitress named Pickles. Her personality was really flirty and fun and all the customers knew her by name. That’s where a lot of Gertie’s mannerisms came from. She is also parts of my own grandmother with some Betty White mixed in. I thought to myself “hmm I’ve never read anything like that, this could be interesting.” The story took off from there and her and Augie led the way.

There are things in life that we all have to face like this at one point or another that will test our morals or sanity, but the people who inspire me most are the ones who overcame those obstacles. Augie is a great example of how facing your fears and overcoming things that hold you back can help you grow as a person.

The world seems like it’s crashing down on Augie, but he manages to hang on with the help of his free spirited grandmother. What were some themes you wanted to capture in these characters and their relationship?

The main ones are that it’s okay to have friends that aren’t your age, that family isn’t always blood, and accepting people and loving them for who they are is the greatest gift you can give to anyone. One that’s a little more subtle throughout the story is that people can surprise you and misconceptions that are assumed about someone right away, can turn out to be completely unfounded once you get to know them.

I have always felt a special connection to my grandmother. Much like Augie does in the book with Gertie. In a lot of ways, I connected more with her than with my own mother, and despite this, I was still very close to both of them.

The relationship between Augie and Rose was heartfelt and certainly tugs at the heart strings. What did you want to do differently with their relationship than what’s portrayed in other novels?

One thing I wanted to stray from was insta-love as well as their relationship revolving solely around sex. While there are a lot of sexual themes throughout the book and some good laughs about it, I also wanted to show readers that a relationship is built on more than just physical intimacy. I wanted to create likeable, yet flawed characters that almost anyone could relate to, because in real life we all have problems and none us is perfect or really ever gets it right. We stumble through life and make mistakes that we learn from, which is what both Augie and Rose do as their relationship blooms. They make mistakes and they don’t get it right the first time.

Augie see’s that there’s more to Rose than she’s willing to show other people. It’s rare to meet someone who sees who you really are right from the start. He’s also willing to let her go to ensure that she doesn’t spiral out of control, even though he desperately just wants to hold on to her. In turn Rose accepts Augie just the way he is, quirks and all. The more she sees who he is, the more she opens her eyes to what she really wants in life and decides to make a change.

Augie’s story continues in the sequel titled The Revelations of August Barton which is currently available on Kindle. The paperback will be available hopefully within the next month or two. 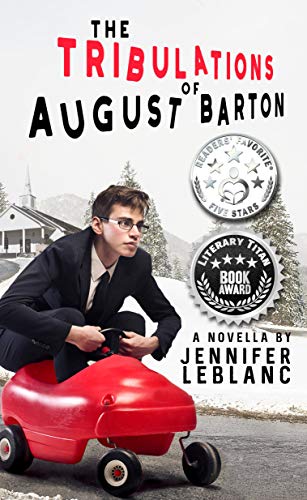 August Barton could never have mentally prepared himself for his freshman year of college: not only has his anxiety increased, but his parents are divorcing, his new roommate thinks Augie is the biggest nerd in existence, and his grandma, a retired prostitute named Gertie, has taken to running away from her nursing home.

Augie just wants to hole up in his dorm room with his Star Wars collectables and textbooks, but Gertie is not about to let that happen. What ensues is a crazy ride including naked trespassing, befriending a local biker gang, and maybe-just maybe-with Augie defeating his anxiety and actually getting the girl.

← Sacrifice and Know-How
The Journey Down South →