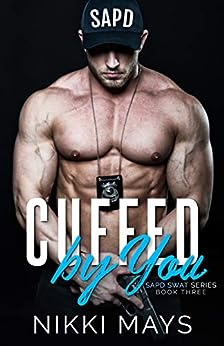 Kayla is almost at her wits’ end. Her ex-husband is a loser of massive proportions, and it just so happens that she attempted to drown him. Ridding herself of his insanity has left her alone to work the business his family built together and raise her four small children alone. With a more than just supportive family of in-laws who actually favor her over their own son, Kayla is making her way in the world one day at a time. A chance meeting with the officer who cuffed her during that lapse of better judgment turned drowning incident leads Kayla down the path to a life she thought was no longer in the cards for her.

Nikki Mays has done it again. Cuffed by You is the third installment in her romance series, SAPD SWAT, and it actually may be my favorite of the three. Kayla and Marc, the book’s main focus, are lively and easily visualized characters. Kayla is every single mom striving to make a better life for her children and resigned to the fact that she won’t allow her heart to be broken again. She walks the straight and narrow, for the most part, and is a truly likable character.

Marc, like the other male figures in Mays’s series, is a wonder of nature. As Mays churns out one stunning adjective after another to describe his physique, readers are left wondering how this could still be considered a realistic fiction piece–he is almost too good to be true. Mays is a pro at making her male main characters into loving and caring men who still manage to exude a rough exterior–they are dreams come true. This is only one of the many aspects of Mays’s writing that make her books so exceptionally readable and easily favorited.

As with each of the other books in the series, Mays has included a hateful and spite-filled antagonist. Enter the ex-husband. Mays succeeds in making Kayla’s ex a virtual monster, and the loathing is almost palpable page after page. While the entire cast of characters, including his own mother and brothers gang up against him, the reader is swept into the same vortex of hatred and animosity. Mays makes it easy to despise him while simultaneously building a case for Marc to take his place.

Mays is queen of the banter. Her dialogue between characters dominates the pages and makes the book what it is–a masterpiece of romantic comedy. While she includes a good bit of the traditional romance elements in her writing, she is able to make her characters jump off the page as they bicker back and forth, hurl jovial insults, and generally function as one loving unit of friends-turned-family.

Mays’s writes for her books to be enjoyed and for her characters to be remembered well beyond the last page–she achieves that, no doubt.