← Stories of the Mother Bear – Trailer
Degsy Hay The Hay Patrollers: EVERY COMMUNITY SHOULD ‘AVE’EM →

Friends of The Tsar 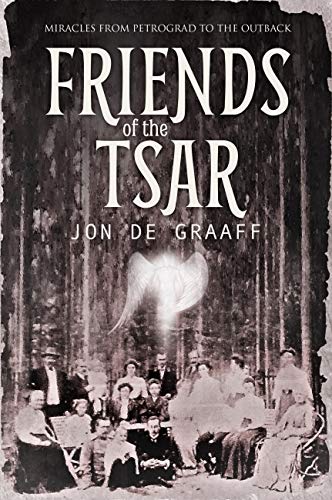 Friends of the Tsar, by Jon de Graaff, is a story about the author’s “Aristocratic Grandparent’s harrowing escape from the Russian Revolution of February 1917.”  The story starts near Petrograd, Russia in 1916 with Vera and George, with George and his mother, Adelaide, saving Vera from a wolf attack. They are at the country estate of George’s father, Baron Alexander Zuckschwerdt. Adelaide and Alexander are very much aristocrats. Vera and George are not on board with the aristocratic ways of their parents. Vera, who also came from an aristocratic family, started rejecting her parents’ ways after Bloody Sunday when even children were killed during a protest.

Vera has ten sisters. Three of them come to stay with her. Monica is 16. Mary is 15. Natty is 10. Vera often gets strong premonitions when something bad is about to happen. Blue is Alexander’s friend. He is an Australian cattle breeder. He comes to stay as well. Blue saves Natty from choking. He learned how to do it on a chance visit with friends. Vera sees it as meant to be. Blue tells story after story of things that happened that seem to have a lot of coincidences. Vera does not see them as coincidences at all. He dismissed them as being luck in the past. He now thinks differently.

The family finds itself in trouble. The country is in trouble. Their money is not worth as much. The people in the country are starving. The family decides that they need to leave. Blue offers to let them stay with him in Australia. Alexander books passage for himself, George, Blue, Vera and the girls for February 27, 1917. The story goes on from there to cover how they escaped and the challenges they faced as they did.

I felt that the story could not decide on what the book was going to be. As I went from chapter to chapter, I felt like many of the chapters could have been stand-alone chapters and were not connected very well. It lacked continuity. There are different stories being told that don’t seem to reach any conclusions. At first, I thought the book was going to be a love story about Vera and George. After the first chapter or so, they seemed forgotten and the book focused on Blue’s stories. Then it would jump to near misses while trying to escape and spy stories. I found myself confused a few time. The language seemed a bit stilted and formal and did not flow like normal dialogue in places.

There is a good story in the book though it would benefit from a bit more organization. The author writes well. Some of the stories were definitely interesting. Some of the story lines had definite possibility and begged for further development as the characters were intriguing and were usually placed in exotic locations.

← Stories of the Mother Bear – Trailer
Degsy Hay The Hay Patrollers: EVERY COMMUNITY SHOULD ‘AVE’EM →