Gazelle in the Shadows 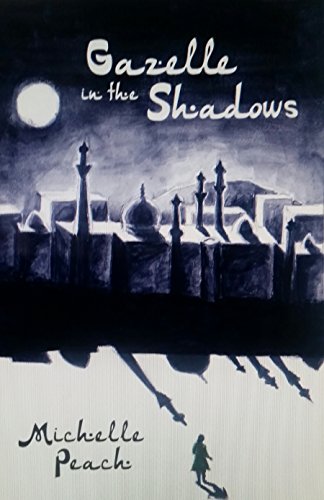 Based on her own life, Michelle Peach has crafted an intriguing story in Gazelle in the Shadows. Some parts of the story are fictionalized according to the author. The novel opens with Elizabeth Booth who has been kidnapped. She’s battered and bruised and not sure who is responsible. Her British diplomatic immunity does not seem to be of any use to her at the beginning of the story.

We then cut to an earlier time on a cold, rainy April day in the north of England. She is in Professor Mansfield’s office, attending school at the Centre for Middle Eastern and Islamic Studies in Durham University. Not sure where she will succeed, she decides to enter the Foreign and Commonwealth Office as a Diplomatic Service and she loves it.

Most of her life seems to have been about finding out who she is in her family. She grows up wanting to leave home and go on adventures. The point of meeting with her professor on that April day is to convince him to allow her to do her study in Damascus. She is the only student from her class going there. On the flight to Damascus, she is told by the flight attendant that there are no hotel rooms and arranges a place for her to stay.

Starting with the people on the flight, I did have to suspend disbelief somewhat to make myself believe that she could be as naïve as she was behaving. It seemed odd to me that anyone would trust a man on a flight and follow him afterward, even if he did work for the airline. It does seem to me that it would raise red flags.

She is literally a stranger in this new land and finds herself offending without meaning to. For example, when she drops bread on to the ground, she does not realize that bread is a sacred food and should never be wasted. She finds that navigating this new, strange land is not as easy as she had expected. I did love her descriptions of the exotic locale. She really brings the countryside to life with her writing.

This story is filled with mystery and suspense. This story was interesting to be because, unlike most books I’ve read, it’s about a place I knew little about when I started reading. The cultural issues that arise throughout the story are every bit as interesting as what is happening in the story. The only negative about the book is that I felt I knew what might be happening early on in the story even though I was not entirely correct. Despite that, the author has crafted a story that kept me turning pages way past my bedtime.