← The Devil Pulls the Strings
Expect an Epic Conclusion → 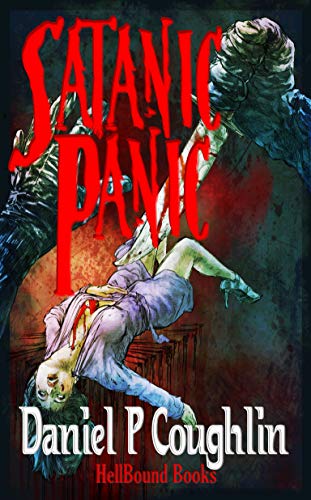 As an homage to 80s B-movie horror, Satanic Panic has so much that the genre offers; sex, death, depravity, and a trio of neer-do-well stars that we follow into the breach.

In the first chapter, a flash-forward scene of terror unfolds which sets the tone for the rest of the book. Even within the next few chapters which introduce our characters, best friends Lance and Brock, then our leading-lady Brianna alongside her skater boyfriend Grady, those first few pages loom over all of their frat-house fueled follies.

For most of the story, sexual panic reigns supreme. Some horror stories are balanced between terror and sex, and this book certainly leans hard into the flesh. Each chapter poses a mental tug of war within the budding love triangle all peppered in-between with the killer’s point of view. These three friends are being stalked, yet the reader is the only audience to how much danger they are heading toward. The most important thing on the minds of Bianna, Brock, and Lance is what is in each other’s pants.

There is an aspect of the Giallo film genre here, in that we don’t see the stalker or who they are, and they fit the black-gloved killer mold to perfection.

Red herrings are used to good effect here. While we spend most of the book with three characters, we realize there has actually been a large cast, and characters, like a professor who is only mentioned for a page or two, are so unique and well portrayed they come back to us as people we met. So, very strong characterization all around.

While some of what goes through the mind of Brianna is incongruent; she is a strong-willed woman but only seems to focus on her looks while alone and thinks of nothing other than the men around her; it doesn’t weigh the pace down as the voice of each chapter is split between the three main characters, the killer, and sometimes the goofy boyfriend Grady who is kept in the dark when it comes to the sexcapades going on around him.

The college theme could be what lowers the stakes here in that there is nothing the characters are striving for beyond the bedroom and the next keg party. Had there been something more on the horizon for any of the teens here, it may have had more impact. And more panic, although the central theme is about trust. The actual Satanic Panic that hit our evening news shows was more of a question of who could a community trust than it was about Satan worship. Even within the pages of this homage to that era, the author makes clear it is more about who is doing evil things than why they are doing evil things.

We do get helpful insight as to how each person thinks but the real mystique lies in how our characters see one another. The dialogue and relations may seem outlandish at a glance, but getting to know each person they all fit and their dysfunction comes across as natural.

If you look for the sexiest story when perusing horror flicks in the bygone era, and want the horror version of a bodice-ripper then Satanic Panic fits the bill with four blazing inverted stars.

← The Devil Pulls the Strings
Expect an Epic Conclusion →