← We All Have Some Darkness
Satanic Panic: A Homage to 1980’s B-Movie Horror → 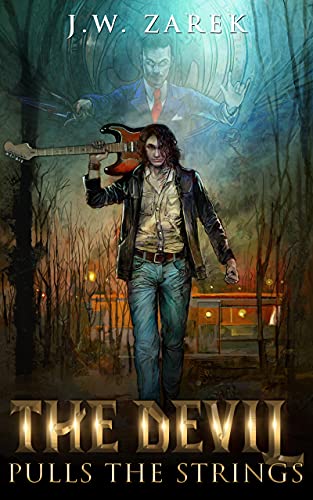 Confusion is the name of the game for poor Boone. Most of the time, he doesn’t know where he is, who he is talking to, or why he is there. Boone’s life is one strange adventure after another, but none of these adventures are planned. Boone Daniels is a time traveler and an unwilling one at that. A tragic event involving his best friend, Flynn, has placed Boone in the very awkward and frightening position of finding someone called “the Professor.” Nothing about his task is appealing, but Boone is not in a position to argue. He’s on a mission to make things right.

The Devil Pulls the Strings is an imaginative science fiction tale by J.W. Zarek. Main character, Boone Daniels, has happened upon his time-traveling abilities quite by accident, and he remains in a perpetual state of overwhelming confusion when his travels take him to one century and one part of the globe after another. While he is not thrilled at the idea of going to New York to take Flynn’s place in a gig, he knows he owes Flynn and owes him big.

Boone’s travels from place to place and time to time happen quickly–very quickly. Zarek has the book’s main character moving rapidly through time to complete the mission he has been given. Readers are treated to numerous tidbits of history as Boone races through time to prevent events he knows will occur. There seems to be nothing left out when it comes to major historical events, famous names, and easily recognizable points of interest. The blend of present-day Boone and time-traveling Boone make for an engaging storyline.

The first-person point of view really makes Zarek’s book a truly engaging adventure novel. Hearing Boone describe his apprehension and his insecurities in his own voice really make the story all the more relatable. He struggles with his strange gift, and he is in a constant battle trying to figure out which way is up and how to solve the never-ending puzzle before him.

← We All Have Some Darkness
Satanic Panic: A Homage to 1980’s B-Movie Horror →