← Left for Death: A Noir Detective Novella
A Sense of Purpose → 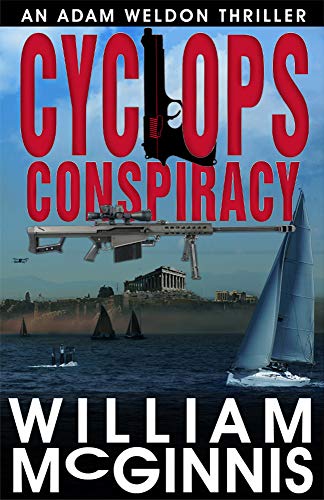 Writer William McGinnis says that Adam Weldon is his favorite character, and indeed he does feature in a number of McGinnis’s action tales. Weldon is a MacGyver type – an ex-Navy SEAL who can turn any tricky situation to his advantage. Unlike MacGyver, however, he does so with a gun in one hand and in the other, an encyclopedic knowledge of how to kill someone bare-handed, Jack Reacher style.

In Cyclops Conspiracy, Weldon teams up with his girlfriend, Tripnee, an FBI sharpshooter, and an alluring drone expert called Sophia. Together, they set sail to prevent World War III.

The action takes them around the Greek Islands and, eventually, all the way to the White House as they attempt to foil the plans of Islamic extremists set on jihad. McGinnis clearly knows his way around a yacht, and most of the action takes place in and around boats, either theirs or those of the terrorists. The limited space on the boats makes for claustrophobic and interesting fight scenes, and clever escapes which the author takes full advantage of.

There is little description of the islands or the coastlines as seen from the water. The plot could be set just about anywhere there is a sea. McGinnis draws on the Cyclops / Greek mythology connection as well.

Throughout the book, the people are beautiful and the bad guys are very bad; the men are tough and resourceful, the women are mesmerizing. Tripnee and Sophia can little more than tolerate each other, a friction caused by jealousy over the attention of Weldon. This is a cliché that offsets the two strong female protagonists. Where there are scenes featuring Sophia attractively tinkering with her guns, I would have enjoyed seeing them be more integrated and vital to the plot.

While the characters were engaging and perfect vehicles to deliver entertaining action scenes, I look forward to seeing them developed further in future novels as they’re interesting characters, but I feel we’re only scratching the surface.

For fans of action-adventure novels there is plenty of violence and threat and lots of shooting with heads disappearing into red mists and a clever twist at the end. Cyclops Conspiracy is a thrilling action novel that will appeal to fans looking for a straightforward story with relentless action.

← Left for Death: A Noir Detective Novella
A Sense of Purpose →