Journey to the Children of Bwola Dances 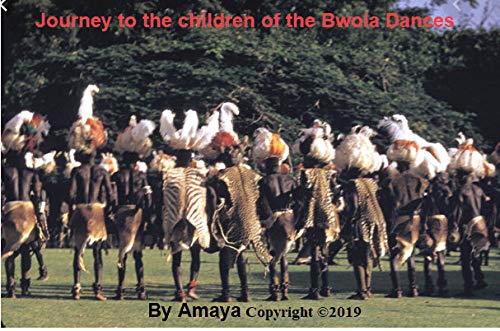 Amaya’s Journey to Children of Bwola Dances is an important book that shows how life is different for people in different parts of the globe. The book may be fictional but some of the events that are mentioned in the chapter have historical significance. The reader is taken through a world of war, extreme violence, drama, politics and rebel groups. The narration is raw and expressive giving the impression of events happening in real-time. Amaya’s writing helps one draw comparisons on how policies are made in western countries compared to other countries in the world. In the book, we see the adverse effects of war and how certain demographics get to be affected. Children and women are the most affected groups when war erupts.

It is a shame how young boys were recruited to fight in the war, robbing them of their innocence and a chance to grow up like other kids. The story is set in Australia and Uganda later on. The Lord Resistance Army (LRA) is rebelling against the Ugandan government. This is a story of pain, brutality, vengeance, hopelessness, power, and lack of humanity. You will get emotional on some pages especially when you read about the struggles of child soldiers. We follow as two teens with completely different backgrounds meet through fate and bond as they share past experiences. One teen, the Australian, is used to a different way of life but it is the difference that makes them key characters in the book.

The events that preceded the abduction of Bob and Samantha were not only disturbing but also upsetting to follow. Through the characters, we see how governments respond to calls of help when their citizens are in danger. The book is not just filled with agonizing stories. We follow beautiful customs and cultures in Africa and how they make societies blend. Reading about the Ladongo dace and how men and women lined up to celebrate a successful hunting trip gave me joy. I visualized how happy the dancers were when celebrating their success. The Lord Resistance Army was an evil group. The aggressive raids the group made and the damage it caused was unnecessary if the people had embraced civility. Through their actions, we learn the importance of having a stable government that ensures the rule of law is adhered.

In Journey to Children of Bwola Dancers you will learn about family dynamics, the power of a united people, the impact of poor governance and many more topics that are related to current events in the world. Amaya’s writing is excellent and her characters in the book were well developed. This book is not just a great thriller and drama novel but also a nice learning tool for readers who enjoy historical fiction stories.

Survivors of the Sun: A post-apocalyptic thriller

Georgia hasn’t exactly had it easy since marrying Nathan. Leaving her home in Australia and taking on the role of wife and stepmother has been a challenge to say the least. However, when Georgia is saddled with keeping her husband’s precocious and entitled niece and her own two stepchildren on an afternoon when she would rather be working on her own jewelry business, life takes a turn she and the children could never have predicted. As she watches her stepson’s hair mysteriously stand on end, Georgia gives it only a passing thought. Soon after, Georgia and the members of her household find themselves fighting for their very lives.

Mia Kingslie, author of Survivors of the Sun, has absolutely hit it out of the park. Her thriller, set in the present and focusing on the extreme likelihood that the world has been hit with an electromagnetic pulse, is phenomenally well-written and gripping in every way possible. Kingslie’s characters, her plot, and the conflicts within are clearly drawn with stunning visuals.

Georgia, the book’s main character, draws on sources of strength most of us could never imagine. When she realizes she has likely outlived her husband everyone she knows, she picks herself up and heads, literally, for the hills with the children and their dogs in tow. After witnessing the horrifying deaths in their city, Georgia somehow manages to concoct a feasible plan for escaping their home with the needed supplies. She is a force with which to be reckoned, and Kingslie builds on her set of skills as the chapters advance. Georgia represents every man, woman, and child living through apocalyptic times learning to adjust as each new set of challenges is faced.

The introduction of Lola into the traveling group makes the entire plot that much more engaging. Lola, a force in her own right, adds an element of unique humor to an otherwise dark and heavy storyline. Her backstory is one that makes her even more endearing to readers.

I thoroughly enjoyed watching Georgia’s relationship grow and flourish with her stepchildren, but more intriguing was the evolving dynamic between Georgia and her niece, Deedee. To watch Georgia grow as a maternal figure was quite amazing. As a parent myself, I found it fascinating to see through her eyes as she begins to find ways to work around Deedee’s idiosyncrasies.

Kingslie writes the most fantastic descriptions of post-apocalyptic terrors. From diseased bodies to the overwhelmingly eerie pictures of stalled cars, silent skies, and ravaged homes. Kingslie’s writing style is highly effective in creating a scene for her readers of almost instant devastation.

Were it possible to give Survivors of the Sun 10 stars, I would do it in a heartbeat. That being said, I can’t hesitate to give it 5 out of 5 stars. It’s hard to find a book that takes hold of your imagination and refuses to let go, but that’s exactly what Kingslie has managed to produce. I fell in step with Georgia and her ragtag crew from Chapter 1, and any fan of apocalyptic thrillers will do the same.