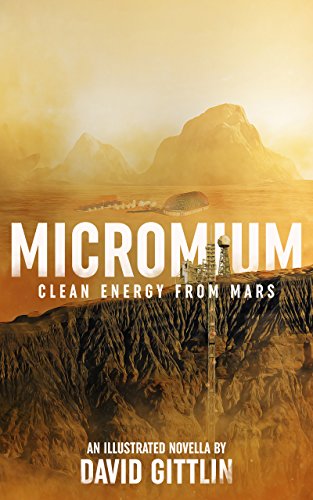 This science fiction novella is set in the not to distant future where the earth is on the verge of apocalypse and living conditions are worse than we could have ever imagined. Global warming and pollution are destroying everything at a rapid pace. A team has been funded to explore Mars in attempts to obtain resources to make the living conditions on Earth sustainable. Micromium is powerful enough (with only a small amount) to give the entire planet clean energy for the foreseeable future. While looking for Micromium on Mars several people die and a task force is created to get to the bottom of the disaster. The investigation uncovers information that endangers several key players.

David Gittlin has written a thrilling dystopian novel that is both evocative and a chilling omen to our potential future if we don’t take measures to curb the affects of global warming. While the novel is reflective of modern issues, it tells a science fiction story that is driven by compelling and relatable characters. This is a short book, and after the first few chapters the novella really picks up the pace once the mystery is setup. There is also a romantic component to the story, which gives this story a surprising dimension, where Logan and a coworker have a short fling. There is a lot of potential for character development, and with the use of some imagination, any gaps in the novella can easily be filled.

While I highly recommend this book to science fiction fans I personally enjoyed the mystery component the most. There is an enthralling investigation into the death of the miners and throughout the investigation several surprising discoveries are made. The discoveries revolve around corruption and ethical conflicts, making the reader think about what they would do in the situations.

Micromium is a thought-provoking science fiction story that throws readers into the middle of a riveting mystery on the red planet.