As The Secrets Turn – Book Trailer

In love with the same face that haunts me….

The falling leaves of autumn are like the deceit in my family lineage. Closing the door on the infinite cold—winter blossoms into the spring of new beginnings. In the next season of my life, I’m mending the pieces back together. Opening myself up, I even begin to date, which is a big step for me.

After graduating from high school, a shocking development causes me to be on alert. When nothing comes of it, I move forward, wanting desperately to put the past behind me.

About to start college, I bump into someone from my complicated past, and my heart is torn. The dilemma I struggle with: Do I let other people’s opinion define who I am? I must decide if I’ll push through the ridicule and pave my own path. Could the face that’s scorned me be the key to my resolve? I’ll never know if I take the easy way out.

I’ve unlocked my darkest secret only to have it return to torment me. As the thorns of his obsession encompass me, I discover I’m part of a twisted ploy. If I don’t figure a way out of this predicament, then the life I’ve known may cease to exist.

Don’t miss the riveting sequel to Madison’s story that will have you dangling on the edge of your seat.
Recommended for 16+ due to mature themes including, drugs, sexual content, assault, and mild language. Some scenes are inspired by true events.
If you’re not a fan of forbidden romance, then this might not be the book for you. 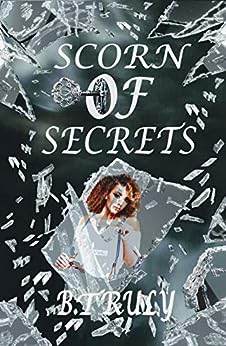 Madison is a regular teenager, albeit a bit shy and introverted, living with her sister and parents. That is, until her father is murdered after being unable to pay his crippling gambling debt.

Madison’s mother moves on quickly by getting an older man with two sons to marry her. They move in with them and soon Madison is starting a new school. Despite her social awkwardness, Madison befriends one of her two step brothers, Justin, and starts adjusting to her new school.

Everything is going well for Madison until one dark night she is struck by tragedy and becomes the victim of sexual assault. After that Madison is brought down by the secrets she carries and the knowledge that no one would believe her if she confessed. She embarks on a self-healing journey and, with the help of Justin, tries to cope with her new reality and the experiences she has been forced to live through.

This book is both a tragic love story and a emotional tale of survival. It will fill you with angst, anxiety, frustration, and finally- love. Reader beware, this is not an easy read. There are many emotions and situations within that can be triggering for certain people, especially victims of sexual assault, but the story always feels authentic and never offensive.

The characters are deep and realistic characters that are emotive and easy to understand. Madison is the character who goes through the biggest evolution throughout this thought-provoking story. Madison is a complex character right from the start and was someone who I consistently rooted for. On top of her introversion and shy demeanor she had to deal with the feelings that surfaced after being the victim of unspeakable acts one dark tragic night.

The plot is enthralling and the pace is good overall, but I felt that the introduction was a bit slow. The story ends on a cliffhanger, which leaves the option open for a sequel.

Scorn of Secrets is an emotionally charged young adult novel that follows an intriguing young woman through an emotional rollercoaster of events that leaves her forever changed.

I must keep it locked away–the memory of my darkest secret….

When the rising tides of my life peak, I’m left struggling with the currents of the storm. The first dilemma is my dad’s gambling debt. Mama bounces back quickly from the ramifications it causes. She proves this by getting a new man. Her Rico Suave is just the tip of the iceberg–she moves us across state to live with him and his two sons.

My outgoing, older sister fits right in–she’s the total opposite of me. I am Madison Guillory, the shy, quiet type. Taught to make the best of even the worst situations, I contemplate giving my new family a chance.

Living with my future stepbrothers is interesting, to say the least. They’re like night and day. I have more in common with the laid-back brother, and we become instant friends. I’m adjusting to Taylor High, and the arrogant brother is even starting to grow on me. Maybe everything will work out after all.

My life finally seems to be falling into place until a dreadful night shatters my dreams. My world is flipped upside down because of the consequences I must now bear.

The memories of that night lurk in the shadows to torment me. If I think of what happened, I’ll succumb to my fear. His face has scorned me. No one will believe me if I confess, not even my own sister. I hold the key to my darkest secret, desperate to keep it locked away.

Recommended for 16+ due to sexual content and language. Some content dealing with sexual assault may be disturbing.