They Were The Only Humans

Beneath the Surface explores how prejudices effect a couples relationship when they come from different species. What was the inspiration for the setup to this thought-provoking story?

I honestly, can’t remember what inspired me with the characters, it’s been a blur, but I do remember wanting to do it underground. The slavery aspect was from thoughts on Exodus, it’s one of my favorite ancient stories and I’m not even really religious. It was probably the biggest lesson in history that we still have to fight to learn from, as a people.

I enjoyed Annabeth and Kane’s relationship. What were sources that informed how their relationship played out?

I took a lot of different things to develop Annabeth and Kane’s character. Most of Kane’s was from Prince Harry, though. He is a man born into royalty, but wanted so much more out of life and to live away from the spotlight of his title, who also joined the military.

Annabeth is someone who has accepted that they live in a new world where humans are not top dog and there really isn’t much they can do about it. She’s not exactly one to roll over, but she also knows she can’t fight back without being punished. Humans did not outnumber the guards, their weapons and strength, so an uprising wasn’t something thought upon as of yet. Especially since the M’Nai took away their biggest weapon, communication. As far as the workers in that mine knew, they were the only humans, the only miners around. It wasn’t often that miners were transferred, so news from the outside was rare and inaccurate.

This is book one in the Surface series. What can readers expect in book two?

Book two will hold more answers as to what the M’Nai plans to do and how they came to be on Earth. It was explained from a human’s point of view in the first book, and now there is new information since reading the ending. More politics on why things are the way they are and what Annabeth’s new position might give her at Kane’s side. 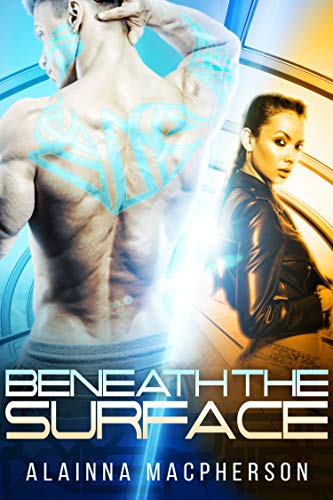 In a world where humans beings are no longer the dominant race and serve the alien M’Nai, one girl begins to notice what others don’t and dares to do what no one has rarely ever tried. She stands up to the race that has enslaved humans and finds that doing the right thing isn’t always the easiest, and change doesn’t always come easily. When you start the book, you are transported into a world that has been overcome with an advanced race of beings that swore to protect humans only to force them to work in mines and live in tents. Though they claim to be protecting humans, our main character Annabeth begins questioning her whole life when she falls for a M’Nai named Kane.

Beneath the Surface is a quick and gripping read that I found to be consistently entertaining. If instant love (or at least immediate feelings) is not something you enjoy reading, this may not be up your alley. If you do enjoy having two characters fall heavily for each other, you will enjoy reading about Kane and Annabeth and their electrifying journey. The story adds a unique twist to the love story and showed real problems that people face when two people (or in Kane’s case, beings) from different backgrounds come together. Not everyone is accepts what happens when two loves decide to pursue their passion. As such, the book will resonate with those who have felt that pain, and it will let others open their eyes to issues they may not have thought about before.

While this steamy dystopian romance felt rushed at times, I did find myself thoroughly engaged with the characters and was surprised at how deeply relationships and characters are explored. The plot, while predictable at times, was enough to keep me engaged throughout, wondering out wild possibilities the way L. Ron Hubbard does in his sci-fi novels. However, Annabeth’s character was my favorite throughout. I enjoyed that she had moments of sass and real courage, which is something I think should be more present in novels today. I was also able to enjoy that Kane genuinely cared for Annabeth and was willing to fight for love, which will resonate with the audience and help them enjoy this enthralling story.