Unwitting follows Dr. Rosen who discovers an autistic man with information on a terrorist who is bombing public places. What was the inspiration for the setup to your story?

I wanted to write a story about an autistic individual—not the high-functioning type usually portrayed in movies and TV. I wanted my character to be more realistic, representative of those who are severely impaired in terms of communication and social interactions.

Dr. Rosen is an intriguing and well developed character. What were some driving ideals behind your character’s development?

Being a physician myself, I think she represents the ideals most physicians hold to be important. The large majority of those who go into the field have a strong moral compass and want to help others, so her behaviour wasn’t a stretch.

I wanted to show a realistic view of the difficulties faced by autistic individuals, and those who care for them.

I am working on the third book in the Erica Rosen MD Trilogy. This book will be called Unforeseen and deals with the pharmaceutical industry. I’m hoping it will be available mid-2022. 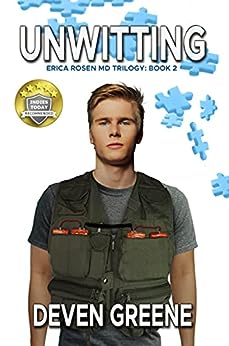 Unwitting is a Medical Thriller and just like Book 1 Unnatural, it is full of suspense and intriguing murders.

Our main character, Dr. Erica Rosen, is just settling into her new life with Lim, when a suicide bombing occurs in the Oracle Park near Dr. Rosen’s home. Such an incident alone would make people feel queasy and anxious, and Erica is in the same boat. Picking herself up, she goes to work where she finds out from a strange call that someone had trained autistic teenagers to be bombers. I loved this take on the story. Unnatural was all about DNA and gene editing, but with Unwitting the author had taken a psychological approach. The harrowing idea that the innocents, that too autistic would make such good suicide bombers really makes the readers think how dangerous a weapon they can become. But at the same time, Zaron, an autistic student went out of his way to help Dr. Rosen solve the case.

This book explores the difficulties and complications that occurs when a person is autistic, yet at the same time they are very intelligent as well. Reading through the book, it kept reminding me of the TV series The Good Doctor in its ability to portray humanity and deep intrigue in genuine human interaction.

While I enjoyed the story I felt that it had a slow start. There was a lot of information from book one to absorb, which helps readers familiarize themselves with the first book, but it felt like a lot up front. After this section though, the book begins to build up that thrilling level of intrigue fans have come to expect.

Unwitting is an action packed medical thriller that effortlessly combines drama with science to create a suspenseful story that will appeal to readers looking for a unique setup to a crime thriller.