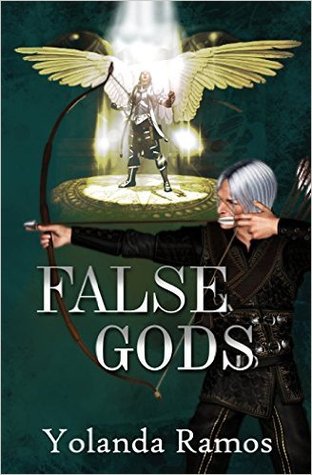 False Gods is a classic tale of angels and demons with a modern twist. Following his adoptive father’s untimely death, young Cormac is inducted as the Seventh Sentinel. Under archangel Michael’s celestial watch, Cormac acquires a team of quick witted, and often-times humorous, powerful beings. Sworn to protect mankind and his loyal sentinels from the ever-impending threat of demons and evil forces, he is thrust into the steep learning curve of what it means to serve his Lord. Cormac must now confront not only his worst nightmares, but the missing pieces of his past as well.

In the first few pages of False Gods, I felt much like what I imagine Cormac did in his first few days as the Seventh Sentinel; confused and unprepared. It felt as if I had been dropped into the halfway point of a dense novel. At first, it drove me crazy. I couldn’t keep characters straight, and between the jumble of formal language and modern day jargon it took me a while to surmise this was taking place in present day. Not to mention Cormac and his team are traipsing all over the globe to the point where I had to drag out a map. Albeit, I started to enjoy the confusion. As small pieces came into focus I quickly became fully invested in Cormac’s journey.

Cormac, young and freshly out of being sworn in as the Seventh Sentinel, quickly realizes that his life is now filled with danger at every turn. He acquires a team of powerful individuals, each with their own strengths. The reader watches as Cormac stumbles through his first few weeks of this new position under the watch of mighty angels. Like any hero’s journey, he is given a quest, one that will lead Cormac and his team all over the world in search of artifacts.  That is, unless demons get to them first.

This book was so poignant and filled with emotion that it left me wanting a bit more at times. False Gods is on the razor’s of emotional drama and a non-stop celestial action with faint notes of romance and intimacy.

The writing is skillfully crafted around Cormac and he comes to life right in front of you, his disposition immediately so infectious in a way that makes you wish you could be one of his paladins. The loyalty of his team and his emotional confrontation with his past grips you harder with each page. The quiet and intimate moments between characters, such as Noelle and Connor, or Cormac and Rachel, are visceral and evocative. Cormac’s team of gifted paladins are a bit hard to keep straight, the descriptions come to light very quickly in the beginning and are easily lost as the story becomes more involved. However, their personalities start to differ, and by the time the book comes to a close I found myself touched by each individual’s support for their Seventh Sentinel and clinging to Cormac’s unwavering determination.