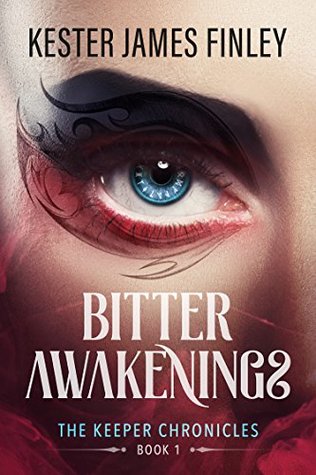 Bitter Awakenings is the first book from an up and coming author Kester Finley. With fantastically creative writing right from the get go and a unique tone that is quickly set from the very first chapter. The book does a lot to show Kester’s enormous potential.

The plot follows Truddie Mae Watts, a woman with supernatural backing and purpose. Truddie is a ‘keeper’, a woman chosen to protect and guard the ‘veil’ between our world and what lies beyond it. Truddie is seemingly immortal, inhabiting the body of a young girl while she uses her supernatural powers to protect the veil. The story starts with her peacefully spending time at home without worry, until the veil, and all the keepers who protect it, come under threat from an occult force who hungers to see her and all keepers dead. Truddie is forced out of her peaceful existence and into a world ending scenario.

Kester Finley does a fantastic job of setting the scene and establishing expectations for the rest of the book from chapter one by setting up the books dark supernatural undertones from the moment you start reading.

The plot seemed to bounce around a bit, leaving me confused at times. On the other hand, the premise is rather unique and executed very well. Kester has a fantastic writing style that dives into deep detail and explains almost everything with incredible craftsmanship that serves as an example of the author’s skill and the vividness with which he has imagined his world.

This first installment sets a firm foundation from which should come a rich story with vibrant characters. Even with this book being paranormal all the characters felt human, with real personalities behind them and dialogue that felt natural, which is a skill even some bigger authors lose. The characters were my favorite, with the banter and inside jokes, I could easily relate.

Bitter Awakenings is a fantastic first installment that paints a vivid picture of a imaginative world. The writing is fluid and descriptive, and the characters are well constructed.