Space Rogues is a genre-crossing novel with elements of a science fiction, action, and adventure as well. Did you start writing with this in mind, or did this happen organically as you were writing?

Organically, I’m more pantster than plotter so the stories just sort of form as they go. In hindsight it makes sense, since as a reader, I’m drawn to similar stories.

Wil was an interesting and well developed character. What was the inspiration for his character and backstory?

Wil is a mix of TV scifi characters. Some John Crichton (Farscape), some John Jaqobis (Killjoys), and a healthy dose of Mal Reynolds (Firefly). I like the idea of the out of his depth character, just getting by. He’s smart, but in a completely foreign environment and even the smallest things is a huge learning curve.

I’m assuming you’re a fan of the space opera genre. What are some books in that genre that you felt most inspired this story?

One of my favorite genres to read for sure 🙂 Omega Force by Joshua Dalzelle, Ryk Brown’s Frontiers saga, Randolph LaLonde’s Spinward Fringe, and Jamie McFarlane’s Privateer Tales are kind of my top four, I devour every new book that’s released in these series.

This is the first book in your scifi series. Where will book two take readers?

I view each book as a sort of episode or movie, so I like to sprinkle in a little bit of “Stuff happens before the story starts; a weird mission the crew is talking about, etc. Book two finds the crew in another “Save the galaxy, even though no one asks them to” kind of scenario. I like using the crew to explore big ideas I have, and letting the story play out from their perspective. 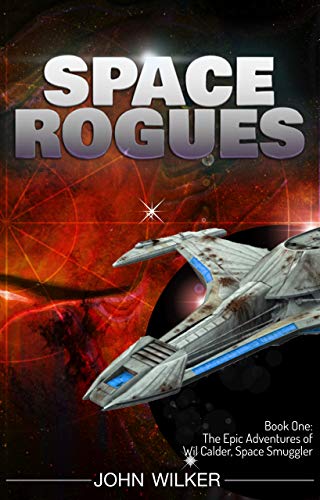 Wil just wanted a crew for his ship.

He got a galactic conspiracy.

Wil Calder is a human, the only one to leave our solar system.

But that was years ago.

Now, he’s a lonely smuggler, looking for a crew, because space is lonely and boring.

Just a few folks to boss around once in a while, is that so much?

What he definitely isn’t looking for, a galactic conspiracy.

But that’s what he and his new crew find. They’ve just met each other and now they have to save the commonwealth from war, no big deal.

Does this untested crew and their entirely out of his depth human captain have what it takes?