Born From A Dream

In the Beast’s Cage follows immortal Lord Blake who must stop an exotic game smuggler without revealing his dark secret. What was the inspiration for the setup to your story?

My debut novel, In the Beast’s Cage, was born from a dream I had in 2016, the complexity and vividity of which still astonishes me today. So that I would not lose it back to the realm of sleep from whence it had come, I jotted down its essence before going back to sleep. A few years later, I would begin work on a short story, which is all that I thought the dream warranted, however, it quickly became apparent that I was dealing with something a great deal more complex than I had anticipated. In 2018, much to my own surprise, I had completed the first draft of a full-length novel.

The characters in your story were intriguing and well developed. What were some driving ideals behind your character’s development?

I believe that, absent a proper backstory, the characters lack the depth needed to justify their actions in the story. If someone is evil without explanation, then what does that say about humanity? I have more faith than that and believe that those who do terrible things are driven to do so by some past trauma. To tell their stories humanizes them, and allows readers to sympathize with them while simultaneously rooting against them. It makes for a more authentic experience, especially when juxtaposed with those who have never known great loss, and their life choices and situations reflect the ease with which they have so far lived. Uncorrupted, but perhaps a bit unfair, too.

Good & Evil, and how the line between the two is often blurred and subjective. Blake, after all, was a murderer too. Also sacrifice (Blake refusing to jeopardize Ginny), friendship, and the importance of community in our individual successes.

I am currently working on a religious satire that gives a (fictitious) historical account of biblical events. It is Science Fiction, generally speaking, but has deeper implications. I have written roughly 50K words and am probably at best half way through the first draft. I hope to have it completed within the next year if I can find the time!

In the Beast’s Cage 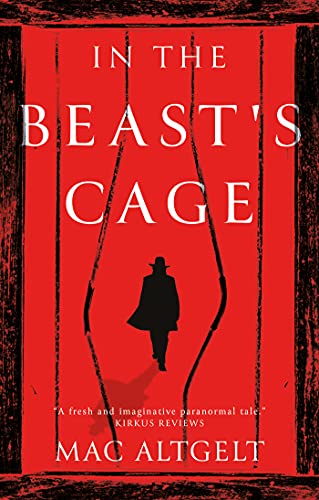 In the Beast’s Cage is an intriguing paranormal thriller written by Mac Altgelt. The story follows multiple characters as their lives intersect and collide, from the mysterious Ainsley Blake to the gentle Virginia Harrison, as well as others, whose part in the story become clearer throughout the pages. Arriving in a small coastal town in Georgia, Blake sets off a chain of events that none in the town could have predicted, and one that surprises him as well.

The characters were absolutely riveting, with personalities and quirks that made them feel like real people. I had a particular affinity towards Ainsley Blake, whose story was revealed to the reader in small bursts that made his character each time clearer and more definite, akin to a sketch being slowly polished into a painting. But ever side characters are granted their own moment in the sun, bringing the story to life.

While I enjoyed the story and the characters, I felt that the number of characters and locations made the the story a bit hard to follow at times. I think this has more to do with the scale of the story. If you like deep and complex stories then this is definitely the novel for you as I can tell that a lot of care went into crafting the details of this story.

I also liked how mundane things, often overlooked, are given importance throughout the story. Books are a prominent example of this: throughout the story, they move from being mundane and common, to being prized and beloved. This romantic view of the mundane, of love and friendship, was well incorporated.

In the Beast’s Cage is a suspenseful supernatural story with a satisfying ending and was thoroughly enjoyable. The story has some creative supernatural elements and an organically high level of intrigue that will satisfy any fan of dark fantasy.