A Ring Of Promises 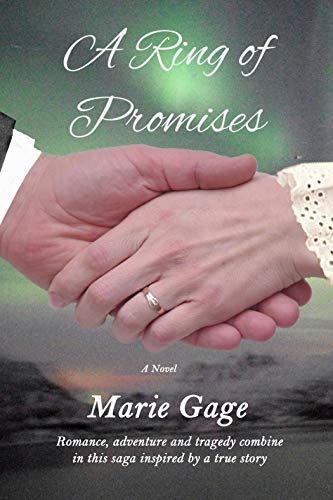 A Ring of Promises by Marie Gage is a romantic adventure set between 1912 and 1916. Will and Janet are to be married and Will sets off for Canada to find a place where they can be together. Before he leaves, he gives her a promise ring. Janet remains behind in Scotland, but while she waits to hear from Will with the news that she can set off to join him, she faces her own personal battle. She swears her sister, Mary-Ann, to secrecy. When Janet loses her battle, the author takes us on a journey to find out what will happen to Mary-Ann and Will.

A Ring of Promises is set principally in Canada and Scotland. I loved the Scottish setting, possibly as being Scottish, I was familiar with many of the locations. I didn’t dislike the Canadian setting, but having some familiarity with the Scottish setting meant I favored that over the Canadian setting. The use of Scottish dialect was also done very well–it gave a real sense of authenticity to the setting and to the Scottish characters, although those not familiar with the Scottish dialect might find those parts a little more difficult. The book centers principally around Will, Janet and Mary-Ann. Although she was only in the first few chapters, Janet’s presence was felt throughout the book without feeling contrived. I have to admit I wasn’t sure about Janet’s suggestion about Will and Mary-Ann, but I suspect that reflects present-day values where it’s ‘easy’ to find love thanks to the proliferation of dating apps and the ease of communication. As Mary-Ann developed her relationship, I wanted to feel for Will, but of all the characters, he was the one I felt least connected with. That wasn’t any fault of the author as she has created believable characters, but I just couldn’t connect with him.

The ending was just right and had the author chosen any other ending, I do not think it would have worked. The author’s note about the fact and fiction element of the book was interesting, and I think knowing the background to the book increased my enjoyment. This book is well researched and worth a read for those interested in historical romantic fiction. A Ring of Promises is a thrilling emotional journey that many readers will enjoy.

Will and Janet know their hearts but distance and duty keep them apart. Will leaves everything behind, including Janet, determined to find a place they can finally be together. Meanwhile in Scotland she fights her own secret battle, determined not to let it ruin his dream. Will they ever see each other again?

Will is a lowly footman to an Earl in England, Janet a nanny to a Lord and Lady in Scotland. They fall deeply in love when they meet on a beach in France during their respective employers vacations to the continent. Correspondence is their only connection except on the rare occasions their employers travel plans align. They form what they believe to be a simple plan. Will is to relocate across the Atlantic and send for Janet when he is settled.

What turns out to be a not-so-simple journey takes Will from the forests of New Brunswick, through the Northern Passage to the icefields of Hudson Bay, with no means of escaping back to civilization. Will’s fortitude and moral fibre are tested along the way. He is a man determined to do whatever it takes to be reunited with the woman he loves.

Meanwhile in the Highlands of Scotland, Janet faces a personal battle with the love and support of her sister Mary Ann. Adamant that her troubles not ruin Will’s dream of a life in Canada Mary Ann is sworn to secrecy.

Inspired by a true story, this romantic adventure set in 1912 takes you on a journey through England, Scotland and Canada. This Historical Fiction Saga is described as “unputdownable” by Digital Arts and Entertainment Reporter,, Margaret Chrystall of Highland News and Media, Scotland.