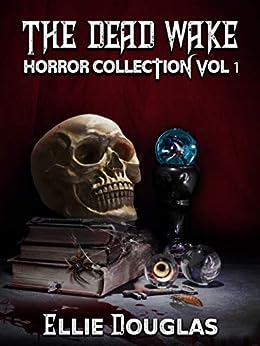 The Dead Wake Anthology by Ellie Douglas is a collection of thrilling short stories. The anthology investigates the idea of zombification threw a number of avenues, exploring what the impacts of an outbreak would be in a variety of scenarios. The anthology sits well within the horror and thriller genres and makes for an exciting though horrifying read. Ellie Douglas often investigates how the transition from living to dead, to living-dead would progress in the various instances of infection meaning that each story is unique in the ways in which this topic is explored.

The opening story is placed within a unique setting – space. The isolation of which is felt by the few characters exposed within the claustrophobic conditions of a space craft. When the Captain John Lancaster teases a crew mate, he accidentally breaks a space rock against the crewmate’s head. Upon inspection the rock appears to bleed. The unique nature of this rock leads Captain John Lancaster to send it as a gift to his daughter before the crew launch. Only when the crew are in space however does the full impact of the space rock’s strange qualities come into full effect. The crewmate, who the rock touched, begins to grow ill with flu like symptoms and is sent to the med bay. With the affected crewmate breaking out in lesions, Ellie Douglas explores in graphic detail the vile nature of the character’s transition creating a visual spectacle not for the faint hearted. The crew now in space, rush to find out if the disease is contagious. Meanwhile, John Lancaster, having sent the rock to his daughter on earth, attempts to contact the CDC and his family to see if his daughter faces the same fate as his crewmate. The author creates an intense feeling of suspense as John grows frantic trying to find out if his daughter will be okay.

Some of the stories are intended to be truly horrifying, such as ‘No More Coochy Coochy Coo!’ which takes place in a hospital, somewhere that maybe considered moderately safe in the event of an outbreak. This short story follows the labour of Samantha who is worried that her partner Jeff will not make it time for the birth of their first-born child. As the labour continues Samantha becomes increasingly more distressed. The new mother starts exclaiming that the baby is eating her. Initially the nurse dismisses it as labour pains, but as the doctor – attempting to aid the birth, begins to lose his fingers to the hungry unborn child, all is confirmed.

Meanwhile, Jeff the expecting father, gets distracted and finds his way to a ward where twenty-three babies lay wrapped soundly in blankets. He notices two children looking pale skinned and with sores, their arms blistered. Notifying a nurse of the babies’ condition he is escorted out of the room swiftly by a doctor as the children are taken to be quarantined. An air raid siren begins to sound outside.

Despite some of these more sombre and horrifying stories, some of the stories are laced with some comedy, such as a talking parrot on a cruise ship that yells profanities as it begins to peck at its keeper. Though, this becomes less humorous as the parrot’s feathers shed and it flies frantically around the inside of an elevator pecking at its keeper’s eyes.

The short stories offer snippets of potential scenarios to get the reader thinking and, being short, make for a perfect night time read – though be wary of nightmares.