The Emperor of Babylon follows an evil emperor who captures an inventor and forces him to create weapons of war. What were some themes that you felt were important to highlight in this story?

A major element of the group called “Wanderers” is that they can use subterfuge to gain an advantage over an enemy. Zurga is not a fighter. He has to generate a mystique to discourage people from challenging him physically. He even encourages people to believe that he could command supernatural powers. The problem is not that Zurga believed his own propaganda, but rather than a rather dull witted ruler believed it. Zurga knows very well that he could not control volcanic eruptions. If he told the truth he would either not be believed or would have been killed.

I think Zurga is a wonderful character, but I wanted to show how an apparent strength can be a weakness. I did point out that Zurga did not lie outright. He was loose with the absolute truth. He was a leader to be sure, and people listened to his advice, but because of his circumstances he would not be chosen to be a King with real power. The growth of civilization is the real focus of the books.

Are you a fan of the historical fiction genre? What books do you think most influenced your work?

Without any doubt or hesitation I can say that Robert Graves has been a huge influence on my writing. His work has brought so much joy to me that I could imagine nothing better than to write something that hopefully will be enjoyed by others. I re-read the series I Claudius on a regular basis.

Tolkien and C.S. Lewis are two other authors that I admire. I am still amazed that they are regarded by some people as being children’s authors. I know that neither of them could be described as “gritty” or “realistic.” I do not read books for realism, I read them for their characters. That is one of the reasons I chose Bronze Age characters. I wanted characters to live in a heroic age, but one that was far removed from real written history. The Bronze Age was a world that was far removed from the Classical world of the Greeks and Romans. I liked the books The White Goddess and Seven Days in New Crete. Graves tackled the Minoans of Crete in very interesting ways. I wanted to deal with the Mycenaean culture of the mainland in part because I did not want to overlap with what Graves did.

What is one pivotal moment in the story that you think best defines Ofeo? Did any of the characters development occur organically through the story?

Orfeo is always changing. He is an outcast at first, and he is trained as a Wanderer. Zurga does not allow him to take that identity, and encourages him to become a warrior too. Zurga sees that Orfeo could be a leader. Orfeo will have to learn through experience how to be a good leader. Over time he will emerge as a great military commander and finally become a King. Each of these stages has a different skill set, but they stack on top of each other to create a whole. A real leader says what people know to be right. For me the second book’s pivotal moment is when Orfeo agrees to go find Zurga. Elaborate reasons are not required, it was simply the correct thing to do. Nurim Sin strives to be cool and calculating, but in the end he really just deceives himself.

Where does the story go in the next book and where do you see it going in the future?

The next book is about the conflict between civilization and nomads. This kind of conflict is preserved in the historical record when the Huns and then the later Mongols invaded Europe. During the Bronze Age there were no doubt many such conflicts.

Zurga’s Fire deals with a nomadic group (they were known as the Getae in Classical times) from the lower Danube river area. Unlike the Babylonians, they have little need for cities. They use captured people as workers. If they win civilization as the Greeks know it will end.

The other books in the series cover adventures (not always conflicts) with other people in the Mediterranean region and beyond. I am most interested in eastern cultures, so in some future novels the heroes head east. Of course they find all kinds of wonderful treasures, but the best thing they find are a few people who are good leaders like themselves. 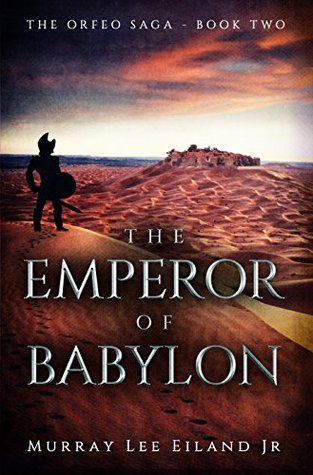 The Emperor of Babylon has captured Zurga – a brilliant inventor – and is demanding to know how to control volcanic eruptions. He also desires iron weapons, a closely guarded Hittite secret. The emperor plans conquer all the lands surrounding the Tigris and Euphrates rivers. He has a vast spy network and is preparing a huge army. Orfeo and Clarice, both trained as wanderers, must use all of their skills to save their friend and teacher. They must also stop the Emperor who believes himself to be a deity. Can they stop a madman that could destroy the entire region?