The Leader of Lors 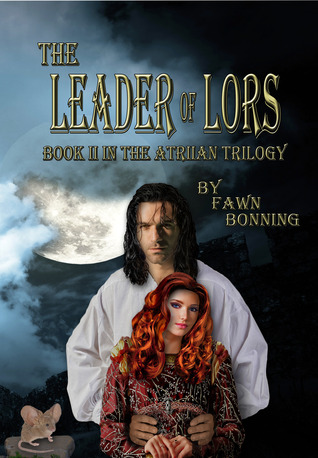 I was pleased to return to the land of Atriia with The Leader of Lors, the second book in the Atriian Trilogy. I recommend you read The Heart of Hannen first, before trying to pick up the complex story and the Atriian language.

Christine Clavin is back in her hometown on Earth. Her daughter Becca, a cherub with blue eyes and her mother’s red hair, is nearly a year old. Christa has reunited with Kyle, who loves Becca even though he is not her father. The night before she is to move in with Kyle, her daughter is kidnapped by Hannen, and she’s dragged back through the fraigen lairs of Black Pond to save her daughter. She is justifiably furious with Hannen and refuses to stay with him. Unable to get back home, she’s forced to remain in Atriia.

In her absence, the legend of Crista Clavin, the Loper of Zeria, has spread throughout the land. Jerrod, the Lor of Cas Zeria, is heartbroken without her. Unable to stand living with Hannen for another day, she and Becca slip away during a day at the market, and Crista’s harrowing adventure begins. Her path leads toward fame as commoners and nobles alike recognize her as their hero. Jerrod wants her for himself, convinced she will bear his heir and will do anything to protect her. Hannen will not give up on her. Others want to use her as a pawn to further their own standing or for their own twisted pleasures. These conflicts become political, and threats of war and unrest are everywhere. But Christa has only one desire that matters: protect her daughter at all costs.

I am happy to say that this book is better than the first. As Christa faces captivity, betrayal, false safety and gilded prisons, she proves time and again that the legends about her are not just “tot’s tales” but very true. Her fiery temper, fierce maternal instinct, and devotion to those she loves carry the plot, and it’s a nail-biting read full of tension and adventure. I had a hard time putting this one down. The characters are vivid, with old friends returning from the past, as well as new characters who bring joy, passion, tragedy, and high drama to the story.

The author’s skill at building a memorable fantasy world is excellent in this installment. A stand-out example of this is when Christa travels the countryside in disguise and uses her legend and notoriety to reward those who help her or intimidate and punish those with bad intentions. It’s a tale straight out of the heroic myths of the past and added so much heart to the story.

Don’t forget that this heroic tale is also a romance. I often found myself ready to throttle Christa for being an idiot, but that’s a compliment because I was that invested in her story. The love scenes are tastefully written, but I would recommend this series for mature readers. Overall, it’s a fast-paced, exciting read. Christa is a heroine with plenty of flaws, and the Atriian Trilogy is a fantasy world you’ll enjoy escaping to.