What if it Were Possible? 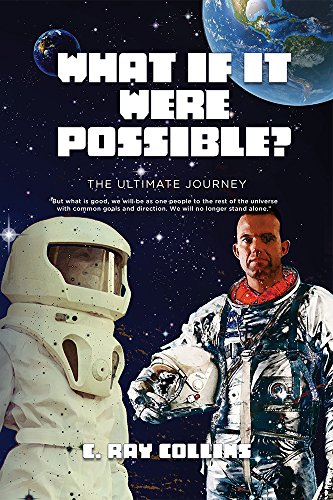 Ray Collins’s book, What if it Were Possible?, is a space-age adventure set not too far in the future. Protagonist, Ray Holland, finds himself heading up a top-secret mission that he didn’t sign up for. He had spent his career working in public relations for NASA, and is a self-proclaimed “average guy.” He couldn’t have predicted that he would be leading a crew of ex-cons on a recognizance mission into the unknown. Ray and the crew set out on this dangerous mission knowing they won’t see earth for years, if ever again. Like any good adventure, there are I was figurative and literal bumps throughout the journey.

This is an entertaining space adventure story that appealed to the kid in me that is always hoping for a whirlwind adventure. The book flows well, but sometimes hit patches where it would drag. I wanted them to get to space so badly that the buildup was killing me. I liked the way the middle section was written with Ray’s logs giving insight into current scenarios and how much time had passed. I preferred the writing in the parts that dealt with space travel. Apart from a few typos the book is written very well. They were few and far between.

Collins did a great job of explaining how the ship flew with the cabin area moving independently of the ship to keep that area level. He explained the ship’s technology in an understandable way. He also explained the wormhole and other space elements in a way that made sense. I didn’t get too lost in the details and could get a pretty good grasp on what was happening and how.

I wasn’t a big fan of the “aliens” being so similar to the people of earth. I could have gotten past the physicality being the same, but there were an overwhelming number of similarities that I couldn’t wrap my head around. Being an 80s/90s kid, I loved the Star Trek and Star Wars throwback references. It was a nice way of keeping everything from getting too technical or heavy. It also showed Ray’s humanity and made his character one that will be identifiable to readers. The references also made it feel like the story wasn’t too far from our own reality or time.

There is a love story that develops in the begginging chapters that I would of liked to see developed further, but the story takes a sharp turn into an entertaining space adventure story and left that bit behind.

What if it Were Possible? was a good read that I recommend to readers of the Sci-Fi genre, especially anyone looking for a space adventure story that stays true to it’s roots. The journey through space was my favorite part and kept me engaged. Readers will root for Ray and his crew of misfits. I look forward to reading more of their adventures in the future.