← Terrible Journey Towards Emotional Hell
The Spirit of Grace → 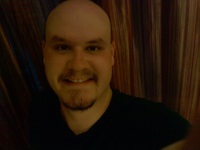 The Empty One is an epic fantasy novel setup like other epic poetry in the past; Beowulf for example. Why did you choose to write in verse for the book and what was your experience writing in this style?

Verse can set a tone that cannot ordinarily be achieved through the use of prose, and by using poetic phrases, more can be conveyed in just a single line than in an entire paragraph otherwise. For example by using short, quick words in succession, you can convey a kind of rushed and hurried atmosphere; conversely, longer phrasing sets up a more relaxed scene. Subtle keys such as these allow for a lot fewer ex-positional portions within the novel, and make room for action and character development. While writing in this style, I took a lot of inspiration from the epic poems of India, such as the Bhagavad Gita and the Upanishads – and as these dealt with fantastic situations and characters, poetry seemed a natural choice for my book, as well. When it came to my experience with writing in this style, it was challenging and rewarding at the same time. It took several weeks to come up with just the right phrasing in certain parts, because I simply didn’t like the mood or atmosphere of a particular section. (The hardest part was chapter twenty-six; it took so many rewrites to get that chapter just the way I wanted it, for a while I considered removing it altogether). Additionally, while not being an established writer, I made many safe choices when it came to the rhyme schemes I used – such as only using end rhymes in most places. However, I fully intend to advance to more complex styles in the future entries of the series.

In your novel I picked up some inspiration from other fantasy novels and mythology of the past that I thought played well in the story. What were some of your sources of inspiration for this book?

As mentioned, I took inspiration from The Bhagavad Gita, but I was also influenced by some Greek mythology surrounding The Titans and the Gnostic text The Reality of the Rulers.

In The Empty One there are two nations against one another, The Akalan Nation and the City States of Shaweh, that represent good and evil in the story. How did you create the dichotomy between these two nations?

The history of the two nations is that they were once one land, but split due to a civil war over ideology. They have a common history, language, and even culture in many aspects – but they cannot get past their differences over the definition of morality. They are therefore like brothers that grew apart over the ages, so much so that they have disowned each other. However, just as you might be furious with a loved one if they committed something atrocious yet still feel the need to help them, this is how the two nations exist. Both see the other as completely wrong and evil, but on some level they still feel inexorably connected.

In fantasy novels it’s easy to get carried away with the magical powers characters have. How did you balance the use of supernatural powers in The Empty One?

Magic is incidental to the story, and this was always the intention. The characters were the focus of the narrative. To achieve this, there was an idea that I always kept in mind: Supernatural powers would just be commonplace for any supernatural being, just as locomotion might seem supernatural to a plant but is ordinary for humans. Therefore any character in the book with these types of abilities would not use them to show off and instead they would use them only when the need arose.

What is the next book that you’re working on? When can you fans expect it to come out?

I am working on two books right now: The sequel to The Empty One, which is currently titled The Reaper, and it is also written in the same style (as an epic poem). This second entry into The Fallen Conviction should be out by early 2017.  The other work that I have going is a horror story, not written in verse, which is much less closer to being done, called Mind.

Connect with the author on GoodReads

Two superpowers – The Akalan Nation and the City States of Shaweh – are at war. The Akalan Nation is a brutal theocracy that believe the City States are evil for not following their beliefs, and both sides are decimated from the years of fighting. In a desperate move to try and win the war for his people and his faith, the king of the Akalans, Darius, enlists the power of a mysterious man with supernatural powers named Lialthas, who claims to be an angel sent to help the righteous win the war against the disbelievers.  However, as Darius soon discovers, Lialthas is not who he says he is – and he has his own motives and aspirations to power.

← Terrible Journey Towards Emotional Hell
The Spirit of Grace →