← Dominion of the Star
Voodoo Child → 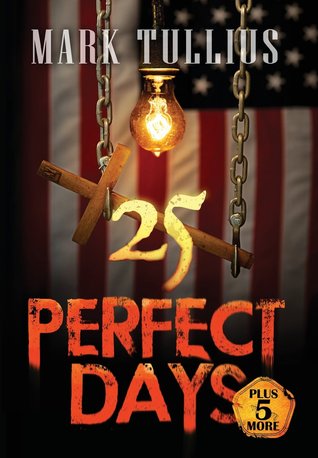 This isn’t your father’s sci-fi novel. Mark Tullius’ 25 Perfect Days Plus 5 More is an eerie look at a future world of pain, control and agony. The characters have so much to lose and very little to gain. It’s a fantastic, gripping tale that betrays a terrifying glimpse at a future where religion meets Big Brother and all the destruction that comes from the union. For reasons not fully explained the earth is deteriorating. Food is scare, water is poisoned and the people are frightened. Due to the extremist nature of the men at the head of the church of The Way and their relationship with politics tiny laws begin to be passed here and there that seem harmless at first. But these are just a smokescreen for the madness that follows and threatens to swallow up and distort humanity as we know it today.

Compiled in an easy-to-read format of short stories which are all intertwined 25 Perfect Days Plus 5 More takes the reader on a journey through forty years. We watch as characters age, fall in their battle, procreate and attempt to carry on the fight. Seemingly innocent and small interactions are expanded upon as the years tick by and the tiny threads that bind all the characters together are strong. The cast of this adventure is large and while there is a appendix at the end of the book which identifies each one and key points of their story, it’s recommended not to look at it until you read the entire book for the first time. There are spoilers in that explanation and it’s thrilling to read it afterwards and find out if how you thought you organized things in your head match the path Tullius paved.

Tullius times each story perfectly. They’re packed with plenty of action and none of them feel too short or too long. Just enough information is given in each piece to keep the reader hooked and dying to know more. In this twisted world which shares some alarming similarities to the world we currently live in it’s hard to separate some friends from foes. Children are stripped of all their innocence, friends and family are pitted against each other and those who try to put up even a tiny amount of resistance are viciously brutalized.

The fabric of the world the reader will find themselves in is wonderfully woven. Each character that has a name is a piece of the overall puzzle, no matter how small it may seem at the time. The execution of such an intense and intricate story line without missing a beat or faltering on obscure facts shows the depth of Tullius’ writing skills.

In this embattled world where we’re left wondering what exactly happened in Canada, as a reader you can’t help but feel agony over the situations the characters find themselves in. There is no discrimination; the poor and the wealthy are all victims of this post-apocalyptic world where God has abandoned all designs.

← Dominion of the Star
Voodoo Child →