← Forever and a Night
Paralian – Not Just Transgender → 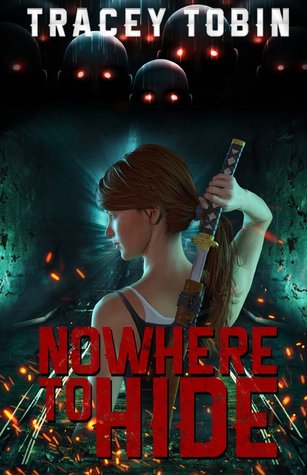 We’ve read it all before: world is ending and suddenly the planet is swarmed with zombies. It always comes on suddenly from either a failed experiment or black magic. The beauty of Nowhere to Hide by Tracey Tobin is that we don’t quite know where the zombies have come from. Their existence is known at first through a viral video shared on the news of a seemingly dead woman trying to eat the young men filming her. Our protagonist, Nancy King, is a bartender by night and struggling student by day who sees this news report while visiting her friend. The two young women shrug it off and make plans to go shopping. Instead of taking ages and years for the zombie issue to spread it seemingly takes only 24 hours. The next thing Nancy knows is that her neighbors in her apartment building have all gone postal with her crotchety upstairs neighbor leading the pack. So begins Nancy’s descent into hell as she has to find some way to escape the madness while caring for her younger upstairs neighbor and traumatized friend.

Friendships are central to the tale in Nowhere to Hide. Tobin introduces the expected characters; the kindly elderly man who acts as a mentor, the youth who is unsure of himself and what is going to be expected of him, the unexpected heroine, the friend-turned-enemy. You name it, it’s there. While it may seem like a lot, Tobin definitely melds and infuses the story she is telling us with essential characters. No one you meet seems like a sacrificial throw-away which can be very common in stories like this. Everyone exists for a reason, even the power-mad ‘leaders’ of the first sanctuary Nancy and her young compatriot, Greg, run to.

Along with friendships there are death-flags waving everywhere. While it is important to note that no one who is introduced is sacrificial fodder, it is clear to see who is going to die and who is going to live. If you’ve read enough of these stories you’ll be able to see the deaths coming a mile away, but that doesn’t detract from the actual story itself. Even the action scenes during zombie combat are well written without lingering on the blood and gore that comes with fighting the undead.

There are bits of the story near the end that seem a bit shallow. This could be a great introductory novel in a series or saga, but it appears to be a stand-alone. There are bits at the end of the story that lead the reader to believe that a sequel would help explain those questions that linger at the end but there is no confirmation of one at this time.

Nowhere to Hide is a great zombie-thrill with a strong female lead and equally strong male co-leads. The characters all have a purpose and while the rotting flesh and combat that happens is messy, there is very little in the writing itself to betray a messily written tale.

← Forever and a Night
Paralian – Not Just Transgender →