← The Six and the Gardeners of Ialana
Bean Takes a Walk → 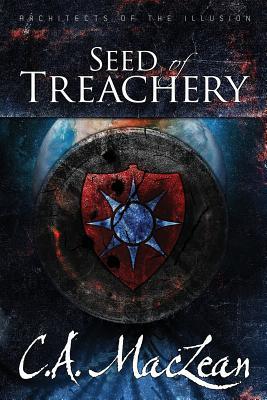 Architects of the Illusion is about adopted royal sisters Eva and Ashy, members of a bird-like alien species. After Ashy is convicted of killing Eva’s husband, she is exiled to a refugee planet in another system, all the while maintaining her innocence, even though all evidence points to her as the killer. Eva turns to training and discipline, and, inspired by her late husband’s political career as a means to affect real chance, becomes a mercenary. Years later, Ashy escapes and sets off to find her own way in the universe, wondering if she’ll ever stop running, or if her sister will ever believe and forgive her. As an invading force threatens the planets with mutant monsters and destructive chaos, Eva and Ashy must confront their pasts if they are to save their futures.

The strength of this book is the characters. You really grow to care for Eva and Ashy, both as individuals and as estranged sisters. Eva’s mercenary lifestyle forcing her young son far away for his own safety, Ashy’s constant flight from the law and lawless – they’re both sympathetic characters, removed from the world both by their own choices and external influences, and both struggling to examine their relationship as sisters. Themes of love and duty are examined, leaving both characters and readers to wonder if familial bonds can ever be fully broken, or if they even want them to be healed. The secondary characters are also thoroughly unique and fleshed out, both through physical description and dialogue. The author has them often speak aloud to themselves when they’re alone, and while it can seem a little conveniently explanatory at times, there’s no denying that it always reveals more about the character. The author also has the characters speak about events in their past as part of their natural dialogue, without further explanation, allowing the reader to infer themselves, and making the whole thing feel a lot more organic, as if you were talking among old friends – mentioning past events without describing it shot-for-shot in a flashback, because you were all there. This is often hard to achieve in books, as a lot of writers feel they have to explain everything for their readers, but when handled correctly, the hints and quick dialogue with minimal set up work perfectly for better immersion.

The settings and world building are handled really well. Cities, space stations, even whole planets, are beautifully described without getting too bogged down in flowery language or extraneous explanations – they almost become characters themselves. The many varied alien species are also described well, with details about their physical appearances revealed naturally within the context of the story, as opposed to a solid paragraph of description, and their appearances are unique, yet plausible, and intriguing as you consider the evolution that brought them to their present forms. The actions scenes are appropriately heart pounding and tense, especially the exploration of the dying space station, and the quiet scenes are allowed to play out to further invest us in the characters. I will say there is a lot of colloquial language used in the dialogue, which I appreciate for attempting more natural banter than speech-like conversation, but it also has a few too many “like,” “it’s just,” and “errs” that bring it into present day, as opposed to distant future. Gangs of ellipses also litter the dialogue, but in the end, these linguistic and grammar problems do not ruin or negatively influence the book overall for me. Blending science fiction, a little bit of the unexplained, and the nature of human relationships, Architects of the Illusion has something for everyone.

← The Six and the Gardeners of Ialana
Bean Takes a Walk →