← Tarbabies: The Siege at Friendly Haven
On A Hero’s Journey →

A Frontier With No Kings

I enjoy playing with tropes and conventions usually found in genre stories, and I guess most of my characters came about from just asking questions. Not necessarily looking to deconstruct, but seeing what can happen if a story or character zigged where it might normally zag in a more traditional telling.

What happens if a hero, who’s been led to believe she is the Chosen One, ultimately discovers her destiny meant absolutely nothing? What if the proverbial “Hero’s Journey” ended, not with a great triumph or even a bang, but a fizzle? To exist in a world where there really is tangible, objective “pure evil” … for one thing, just how surreal would that be, but also how would people define their morality in the face of it? And in such a world, where demonic creatures just ARE evil, what if one somehow turned out to be a decent, kind-hearted person? We’ve seen plenty of roguish scoundrels who love a good fight … but wouldn’t something have to be severely wrong with such a person to get that much enjoyment from violence?

I also like mixing tropes or concepts from different genres and seeing how they gel or clash. For example, even though he doesn’t actually appear in The Jinxed Pirate, the Enforcer is essentially a slasher-movie villain thrown into a fantasy adventure. I like seeing what can happen when varying genres intermingle.

Once I start thinking about these question, several characters start to take shape, and then it’s a matter of throwing them all together and taking them to their logical—or absurd, or surreal, or horrific—conclusion.

Who was your favorite to write for?

I suppose it shouldn’t be a surprise my three main leads—Katrina, Krutch, and Lily—are my favorites. I’m not sure I could pick one, especially as their arcs fluctuate with the story. Katrina is the most fun to write when she’s tormented about her past and trying to rein in her temper. Krutch is most fun when things get out of his control and he’s frantically trying to bluff or botch his way through trouble. And Lily when she’s conflicted about her own nature and trying to be a good person in spite of what she is.

I feel like the world you’ve created in The Jinxed Pirate is brimming with possibility. What was your inspiration for Graylands and how did it evolve as you wrote?

Most of my main protagonists were created separately, and I only had a vague notion they would exist in the same world. Since most of the archetypes and tropes I liked playing with—destiny, good & evil, etc.—were best suited to fantasy, I needed a sandbox for them. So Graylands began as a pretty stock Tolkien-esque world of medieval villages, knights, wizards, and demons.

When thinking about what I wanted my world to be, it occurred to me the standard fantasy setting is usually modeled after medieval Europe because that’s what Tolkien did. However, Tolkien based Middle-Earth on that for a specific reason. He wanted to create a distinctly European mythology that was based on Europe’s history and culture.

As an American, we don’t really have a medieval times in the United States. The closest we have is the frontier times and Wild West. So I decided to take the standard medieval country of knights, swords, and wizards and depict that through an American frontier/Wild West filter, and as a result, Graylands took shape as a land where people would flee their ‘old world’ for the new one—whether for freedom, escape, or to just disappear. A frontier with no kings or emperors and a loosely defined system of law, ideal for my cast of misfits, difters, and outlaws.

The pirate Krutch Leeroy is an intriguing character that is meticulously developed. What were some hurdles in the story that you felt were important to the characters development?

When I first began outlining the story, I thought Katrina would be the more active figure in Seba. I assumed she would pose as a mercenary and infiltrate Clock’s organization while trying to find Jagger, leaving Krutch as a more passive, almost comic relief character. Everyone would assume he was the mastermind behind everything, when in reality he’d be trying to mind his own business.

But after the first draft I realized that wasn’t going to work. Katrina didn’t reach Seba until the mid-point of the story, and our introduction to the city and its various players wound up through Krutch’s POV. He needed to be more engaged and active, otherwise we would’ve been left with a tedious series of scenes where Krutch meets someone, they talk at him, and he doesn’t react. It also created a question of why he doesn’t just leave if he doesn’t like these people bothering him.

So I needed Krutch to actually want to be in Seba and have a goal. It soon occurred to me that a logical question to address was, if everyone believes Krutch Leeroy is this dangerous bad-ass, why doesn’t he embrace it and enjoy himself? If his attempt at playing a hero in The Ghost Princess blew up in his face (literally), maybe he should try playing villain?

Audra and how he responded to her was also important. In the first draft, she was an unwanted companion tagging along against his wishes, and it was fairly obvious she might be trouble. So I adjusted her character to make her more appealing and have him more open to a relationship with her, which turned out fitting with the other protagonists being tempted by a seeming ally—Scifer for Katrina, and Dust for Lily.

Running with that, I was pleased to find Krutch developed a pretty solid arc through the story that fit thematically with the other characters’ efforts to find themselves and decide who they want to be—or, in Krutch’s case, what he isn’t.

The Jinxed Pirate seems like it’s ripe for series. Is there another book in the works?

Yes, definitely. As of right now, I’m debating whether to jump into the third book or to try something different, but the Graylands story will continue. We’ll see Vincent Dune and his army steamrolling around the country, which will lead to conflict with Trayze Kilnerova and war for control of Graylands.

Everyone’s going to get caught in the middle of this coming battle. Lily, by chance, finds herself a target of Trayze. Katrina and Krutch will both get caught up in this mess, and they will actually meet in the next book, finally. Lock is searching for Cassie, and as Dune was the one who kidnapped her, he’s going to end up going in that direction. Cassie, meanwhile, is trying to find her way home and along the way might find “help” from a certain scar-faced serial killer. And there’s the Elder Demon the Jackal unleashed flying around. 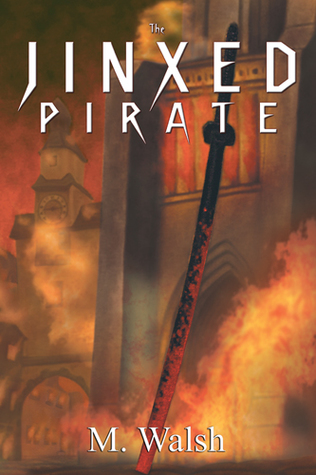 “Graylands is where people go when they don’t want to be found.

Within this unsettled country of drifters and outlaws is a city where the worst of the worst gather. A place of thieves, brigands, and murderers known as Seba. In Seba, law is an illusion and order is kept through cruelty and bloodshed.

On the run from Sentry Elite and bounty hunters, supposed pirate Krutch Leeroy finds himself in this bloody city where his infamous reputation garners him the attention of Seba’s various feuding powers. Despite his efforts to lay low, Krutch is soon caught in the center of backstabbing schemes and deadly plots.
Meanwhile, after the disaster on the Blind Cliffs, fallen princess Katrina Lamont finds herself nearing rock bottom. Her drinking and temper worse than ever, she sets out on a desperate quest to find what remains of her people. Her journey will also lead her to Seba, where she will tread the line between salvation and damnation.

Amidst this are the Synclaires–a family just moved to Graylands in the hope of a fresh start. However, chance of fate and rash decisions will draw the family into a sinister plot that threatens to bring tragedy and doom to their door

As Krutch, Katrina, and the Synclaires face threats from all sides, they will each unwittingly find themselves caught in a battle that may destroy the delicate balance keeping Seba from consuming itself in chaos.”

← Tarbabies: The Siege at Friendly Haven
On A Hero’s Journey →