The University of Corporeal and Ethereal Studies 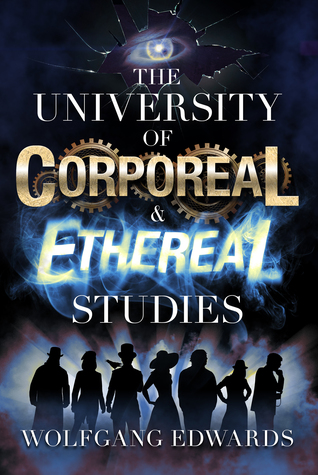 Upon entering the book, The University of Corporeal and Ethereal Studies, the reader is immediately greeted with an acceptance letter. Wolfgang Edwards uses this as a sort of introductory to foreshadow what is to come: you are literally stepping out of our own reality and into this new one and this letter serves to summarize that. What follows is the collections and stories of various students and characters who attend this university. Set in a fictional, sometimes bizarre, universe, Edwards explores various facets of the supernatural, blending fantasy with characters who have very human traits.

I think an interesting way to categorize this book is like taking Harry Potter to the next level. You sort of get that feel because of the setting that it’s in. It’s not magic per say, but exploring otherworldly things, some of which I was unfamiliar with before learning about it. So that’s really the closest way to describe it, although it goes far beyond that. I learned a lot because certain things piqued my interest which I honestly have never heard about before. The book is intriguing and I became more interested the more I read. One such example was a chapter titled ‘The Oneironaut’ which is based off a concept called oneironautics. I learned that this is the concept of lucid dreaming, or being able to control your dream, whether it is trying to wake up from a dream or make something happen within the dream.

The actual story is divided up into a number of different perspectives from each character. Some had more relatable stories and more developed characters than others; some were truly fantastic. It reads like a dark adventure of disconnected people that the author is able to draw together for a bigger purpose – much bigger, and much more dangerous. Throughout the various chapters, we learn of different schools within the University, from which the different characters attend. There’s the School of Coin, School of Metallurgy, School of Engineering, etc. Each school is headed by a dean; and one sticks out in particular. Dean Merkea – an unpleasant man with an ugly, tattered demon dog who even urinates on a character’s shoe at one point. My favorite chapter, Prisoner from Beyond, ties together Dean Merkea, a curator, and unravels the launch of a very unique exhibit at a museum.

Despite its setting, the author manages to piece together a few solid pieces of insight every so often that can be just as intriguing as the story. One such example was of Arakatzeko, a character who can be related to someone like Socrates today: deceased, but full of wisdom. As Araktzeko is studied, we learn alongside the characters: “the true rulers of the royal palace were the cats, who were said to live through every change in royal families without incident”. Such tangible reliefs are welcome and help humanize an otherwise crazy setting.

As the book progresses, you get a feeling it’s heading towards something – just not sure what. The unique stories of each of the characters has surely got something for everybody, admittedly some more than others. It is guaranteed to stay fresh and new until the very end, which may leave you wishing that the author could’ve just kept going.