← The Glass Demon Book Trailer
Knocked up by the Billionaire →

Because It Was Raining 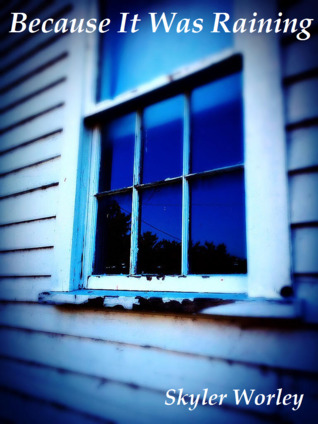 Because It Was Raining, written by Skyler Worley, tells a story of a man who goes by the name of Louis. He is a complex man dealing with death, loss, and mourning whilst trying to find his place in the world. Louis joins two other lost souls, the three dysfunctional amigos, who mask their loneliness with the swirl of a pipe. Together they venture into Kansas City where they find broken homes and people, lost in the filth of their demise. Will Louis break free from the demons that haunt him and finally find himself or will he be forever lost in a world of chaos?

Because It Was Raining is a novel about grief and how we can be trapped within the constraints of our own minds. The story is simple but effective, following a friendship group who are living in a world where they attempt to solve and mask their problems with drugs and dodgy relationships.

Skyler Worley writes with a creative flair, pulling the reader in with emotive words and concepts. The language is beautiful, carefully curated together to produce a complex and vivid picture of the scenery and characters. The story seems to switch between a hazed, drug-fuelled state to a deep and contemplative mindset. Louis wants to understand the meaning of life but is tortured by the losses of his past, finding analogies in his current life situation.

Because It Was Raining deals with the complexity of death and how it can shape your life in ways you least expect. There are so many emotions and raw situations that the reader will be able to relate to, especially if they have lost a loved one.

I enjoyed watching the character progression of the character “Boobe” as she takes on a motherly role whilst still involving herself in tools to mask her depression. She has profound moments of wisdom which provokes the reader to consider life and its meaning. For example, she states that the world lacks equality and some of us are born with a silver spoon, others with a plastic fork. You can then either choose to change your fate but only within your ability to alter it. Her life is complex as well as the characters she invites into her life and home. Boobe’s story is uncovered the further you move throughout the novel, exposing explanations and reasoning to her behavior.

Each character has their own personal backstory which has led them to a place that is lonely and dark. It’s a reminder that drugs are often a coping mechanism for those who are crying out for help. Because It Was Raining triggers a sense of empathy for the characters and the tragedies that they have endured.

I would recommend this to anyone who enjoys a story about finding life after loss and all the complexities that come with grief.

← The Glass Demon Book Trailer
Knocked up by the Billionaire →